Tennille “Neil” Lyons has her hands full with Cecilia, her drug addicted sister who recently turned to prostitution to maintain her addiction. Having her sister commit to going to rehab feels like a stroke of luck, until the dealer/handler shows up making threats. While drowning her worries at a hole-in-the-wall bar, she meets a handsome biker. As much as she wants to dismiss him, she finds out he is rougher and tougher than any other man Neil has met before. Which may come in handy, because if Cecilia doesn’t pay her substantial debt, the dealer intends to collect from Neil instead.
Augustus “Razor” Richardson is prospecting with the Riot MC after being renounced from his old MC. He has a past and a reputation as a ladies’ man, but rarely does a woman so blithely give him the brush-off. He knows something is wrong, but she slips away before he can figure out how to help. When an unexpected phone call puts her back in touch, Razor will stop at nothing to protect Neil from harm. However, Razor’s past isn’t done with him yet. Can he prove to Neil that she can trust him before it’s too late? 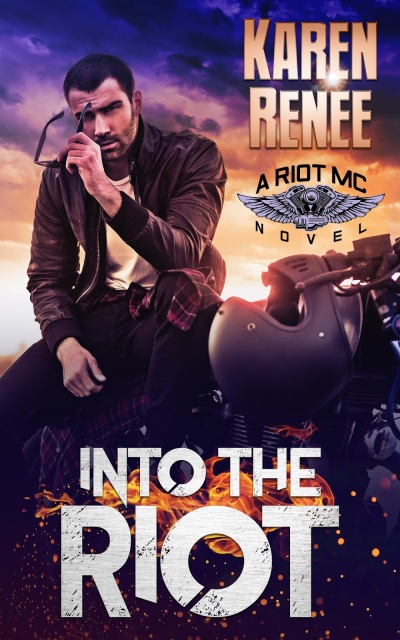 He wasted no time and kissed me. His lips encouraged mine to move with his, and a delicate dance of lips and tongues ensued. My thoughts jumbled as I tried to decide what made the kiss so delicious, the sensual feeling of his lips on mine or the taste of him coupled with the concentrated smell of his designer cologne. Then, it didn’t matter, because I felt his thick thigh wedging in between my legs and all of his weight pushing against me.
Once my legs spread to accommodate him, the kiss went downright ferocious. His hands shoved into my hair and one gripped my locks hard. My hands went under his t-shirt to feel his abs, pecs and then roamed around to stroke his lats. Our tongues dueled brutally, and I got the impression that Razor was just as hungry for it as I was. I needed to get laid. It had been a damn long time, and I was capital-H Horny!
I heard loud clinking of glasses and muffled male laughter. It dawned on me that his room backed up to the bar area of the common room. If I could hear them, then it stood to reason that they would hear me if I got loud. I did not want to have an audience to this, even if it was only for the audible portion of what we were doing. Plus, Vamp and Jim’s words about Razor being a player came back to me. I wasn’t looking for a relationship, necessarily, but I also wasn’t going to be some kind of one-night stand for a pretty-boy player like Razor. I jerked my head away from him and his hands in my hair loosened.
“What?” he whispered.
After a long blink, I looked into his eyes and said, “I…we…we just can’t. Not—”
It was on the tip of my tongue to say ‘Not right now’, but the fact of the matter was that the two of us couldn’t do this at all. He was not my type. I was not up for being chewed up and spit out the way that good-looking men were prone to do. But as horny as I was, it was taking all of my willpower to restrain myself. I pushed against his shoulders to get him off of me, but he was damn heavy.
“Not what, Neil? Not here, not right now?” he asked and his voice was exceptionally husky.
“Not at all,” I said in a small voice.
His eyebrows drew together and his eyes narrowed. “‘Not at all?’ Why would you say that?”
I kept quiet.
His eyebrows shot up and he said, “You don’t seem like a tease, so why are you fighting this so hard?”
I opened my mouth to speak, but his finger pushed on my lips. “And don’t give me your bullshit line that I’m not your type of guy. You’re gorgeous, I’m semi-good-looking –”
My chin tipped up with my laughter at his outrageous statement. I stopped laughing and leveled my gaze on him again. His face had softened and if I didn’t know better, I’d say he looked like he was in awe. He couldn’t possibly be looking at me like that.
“I was wrong,” he whispered.
One of my eyebrows went up in question.
“You’re gorgeous always, but you belly-laughing is a sight to behold.”
Heat raced to my cheeks, so I pushed against his shoulders again with more oomph, but he still wouldn’t budge. “Get off of me, Romeo. We had dinner, it’s time for me to go.”
He shook his head and his weight became heavier on me. “Not until you tell me why.”
I was getting irritated and I blurted, “I’m not going to be just another notch for you.”
His eyes glittered at me. “People been feedin’ you shit about me.”
“Um, well, I hadn’t thought of it that way,” I whispered.
“Right. You aren’t a club whore, and you aren’t some chick who came to our party for a little sumpin’-sumpin’, Neil.”
I sighed, but he went on, “I’m a flirt. Hard not to be when I look like I do. So, yeah, I’ve had lots of ass and can usually work my way in with any chick I see. That gets me a rep that isn’t entirely true. So, we’ll stop, but you aren’t going just yet.”
“What are you talking about?”
“This wasn’t ‘just dinner’, but I’m making you uncomfortable, so let’s go hang with the brothers.” 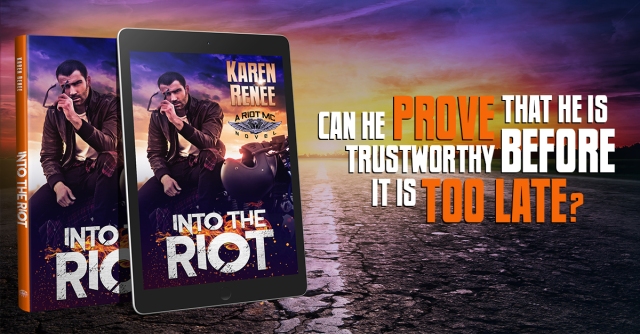 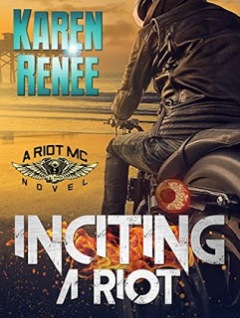 Karen Renee is the author of the Riot MC Series. She has wanted to be a writer from a very early age, and she’s finally bringing that dream to life. She has worked in advertising, banking, and local television media research. She is a proud wife and mother, and a Jacksonville native. When she’s not at the soccer field or cooking, you can find her at her local library, the grocery store, in her car jamming out to some tunes, or hibernating while she writes and/or reads books.