Carrie Reed has always been known as her hometown’s good girl, yet she still loves Magnolia, North Carolina—after all, this is where her newly discovered sisters, Avery and Meredith, live. But Christmas is on its way, and with it her first love, Dylan Scott—back in town and planning on changing everything she’s ever loved about Magnolia with his real estate development project…but not without a fight.

Returning to Magnolia was never in Dylan’s plans—it holds too many reminders that he would never be good enough…and memories of the girl he left behind. But when a tragedy leaves him as the guardian of a grieving teenager, Dylan returns, ready to remake the town into something only money can buy, small-town traditions be damned. But with Carrie determined to stop him, he finds himself wondering if redeeming his teenage reputation is worth losing out on his second chance at love.
ADD TO GOODREADS 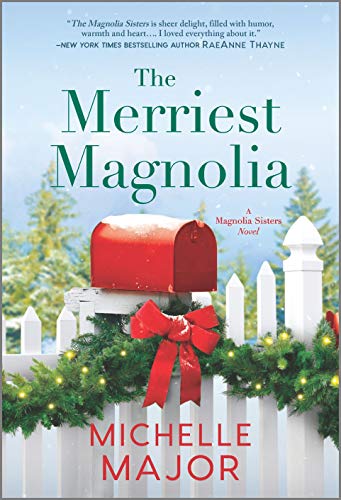 Review
After the death of her father Carrie has discovered that the life he was living was nothing but a lie. Rather than the affluent person he pretended to be instead Carrie is trying to settle the debts of his estate with her two half sisters who she knew nothing about but have quickly become her best friends. She loves her hometown and is trying to right the wrong of her father but her plans to revitalize the town have become a whole lot more complicated when the man who loved and left her year ago returns.

When Dylan finds himself responsible for his nephew Sam when his cousin and his wife passes away he wants a different life for him than the one they were living in Boston. He has recently purchased some real estate and has plans to draw people to town whether the townspeople agree with him or not.

If the past between Carrie and Dylan wasn’t enough to overcome, they now find themselves with opposing ideas on how to help the town and planning a Christmas celebration when one party embraces the season and the other party wished it never existed. This is a touching story about love, family and realizing what and who is important in your life.