She drives him crazy in court. He’s the most irritating, self-absorbed defense attorney she’s ever met. What happens when a couple like this goes from enemies to lovers in one moonlit night on his boat?
Assistant District Attorney Hayley Casella wants to tear her hair out whenever she has to argue against her nemesis, Paul Covington, in court. She’s battled the white-collar defense attorney for a year and their appearances together are only getting more emotional and tinged with sexual tension.
Hot shot attorney Paul Covington is not letting DA Casella ruin his chances of becoming a partner in the prestigious law firm he joined last year. She’s a looker and smart as hell, but he’s as determined to show her up as she’s determined to put him down.
This heartfelt legal drama is backdropped by the glamor of New York City galas, restaurants and boat trips on the ocean. Will Haley and Paul be able navigate the murky waters of competing careers and baggage from their childhoods to make a life together?
Don’t miss all The Casella Cousins Books: Hayley, Seth, Finn, Alessia, Gideon and Ronan from the NEW YORK TIMES and USA TODAY bestselling author Kathryn Shay.

He took her for granted in their young life together but now he wants her back. She’s having none of his pleas for a second chance, not after he broke her heart in a million different ways.
Legal Aid Attorney Seth Casella is a truly good guy. Or so everybody thinks. But he’s got a darker side, one that surfaced when he repeatedly betrayed his former girlfriend, Julianne. He tells her he’s changed, but she doesn’t buy it.
Music therapist Julianne Ford is sick of being the forgiving, good girl next door. Not only does she reject Seth’s overtures—again!—but she’s taking her own walk on the wild side now, and she likes it. Most of the world sees them as defenders of the poor and neglected, and they are, but together they just can’t get it right.
A heart-breaking legal aid case for Seth and the challenge of helping her dysfunctional students using her beloved music backdrop complicate their search for the way back to each other and a reunion that will last forever.
Don’t miss all The Casella Cousins Books: Hayley, Seth, Finn, Alessia, Gideon and Ronan from the NEW YORK TIMES and USA TODAY bestselling author Kathryn Shay. 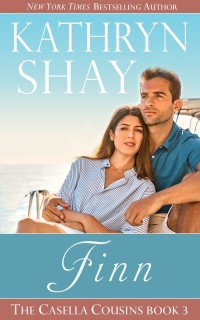 He prefers older, sophisticated women who know what they want. Or at least he did, until he begins to see his assistant in a different light.
But she’s done with her stupid crush on her boss. Done, done, done!
Finn Casella was always the shy, reticent one in the midst of the lively, outgoing Casella cousins. When he was young, he liked books and writing more than he liked people. Now a successful independent bookstore owner in the heart of New York City, he’s settling into his life and wants to get back to his unfinished novel.
Millie Morrison worked her way through a college degree in literature and a Masters’ Degree in business by supporting herself with her job in the bookstore. She’s generous and sensitive to her friends and customers. But each overture to her boss has been met with cool professionalism. Well, she’s overcome harder things in her life than unrequited love.
Can these two people, with more in common than they realize, forge something new out of his emotional baggage and her starry-eyed optimism? Some interesting plot twists will keep you guessing and rooting for them to make it—together.
Don’t miss all The Casella Cousins Books: Hayley, Seth, Finn, Alessia, Gideon and Ronan from the NEW YORK TIMES and USA TODAY bestselling author Kathryn Shay.

She married the love of her life at nineteen—and then he died.
He knows he’s not somebody she should get involved with. But he can’t seem to leave her alone.
Alessia Casella Benatti had her happily-ever-after and now at thirty-four, is only interested in finishing up college and taking care of her three rambunctious boys. But when she enrolls at City College for her courses, she meets Dylan Davidson and finds him interesting, smart and, well, flirtatious. Which makes her start thinking again about love. And sex. Both in short supply.
Dylan Davidson hates what he’s come to do at City College. Sure, it’s a boy dream to flirt with every available girl on campus. Nobody would guess that big, tough Dashing Davidson wants a woman in his life, one who’s all grown up and not concerned with her looks or the color of her nail polish. But his uh-oh alarm goes off when Ali Benatti befriends him. She doesn’t fit into the job he’s here to do, and not only will he break her heart, but he’ll jeopardize a very important mission.
Don’t miss all The Casella Cousins Books: Hayley, Seth, Finn, Alessia, Gideon and Ronan from the NEW YORK TIMES and USA TODAY bestselling author Kathryn Shay.

So, crucify him for it. He doesn’t like working with women in the harsh world of police law enforcement.
She sees herself as tough as any man. Then she becomes his boss.
Hidden Cove Police Officer Gideon Casella is a hard man. A divorce three years ago still has him grumpy and out of sorts. But he’s a top cop, which is why he thinks he’ll get the promotion to sergeant that’s being announced soon.
Anabelle Sanders is on her way up the law enforcement ladder right to the commissioner’s office. But she’ll settle for one step at a time, even if she does have to walk all over Gideon Casella’s ego and his barely-concealed chauvinistic attitude. Man, she’s been dealing with men like him all her life.
It comes as a shock to Gideon that the brass gives the position to Sanders, a tough-as-nails female in the department. When he’s assigned to work on a special task force with her—under her—he’s furious at the department, at her, and at life in general.
Will these two hardened-by-life cops be able to find a soulmate in each other?
Don’t miss all The Casella Cousins Books: Hayley, Seth, Finn, Alessia, Gideon and Ronan from the NEW YORK TIMES and USA TODAY bestselling author Kathryn Shay. 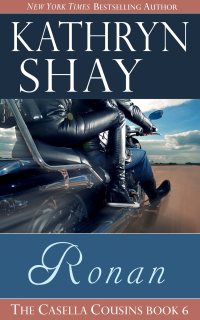 Ronan Casella left home at eighteen. He could never tolerate his mother, and he was sorry to abandon his beloved sister and brother. But he couldn’t stay there any longer after his father died and after Ronan’s girlfriend was involved in a fatal car crash. He heads to Hollywood where he becomes a television and movie star. After ten years, he disappears from that job, too.
The mystery as to what’s happened to Ronan in the intervening decade is revealed in The Casella Cousins Book 6.
Don’t miss all The Casella Cousins Books: Hayley, Seth, Finn, Alessia, Gideon and Ronan from the NEW YORK TIMES and USA TODAY bestselling author Kathryn Shay.

A NEW YORK TIMES and USA TODAY bestselling author, Kathryn Shay has been a lifelong writer and teacher. She has written dozens of self-published original romance titles, print books with the Berkley Publishing Group and Harlequin Enterprises and mainstream women’s fiction with Bold Strokes Books. She has won many awards for her work: five RT Book Reviews awards, the Bookseller’s Best Award, Foreword Magazine’s Book of the Year and several “Starred Reviews.” One of her firefighter books hit #20 on the NEW YORK TIMES list. Her novels have been serialized in COSMOPOLITAN magazine and featured in USA TODAY, THE WALL STREET JOURNAL and PEOPLE magazine. There are over ten million copies of her books in print and downloaded online. Reviewers have called her work “emotional and heart-wrenching.”