If you’ve ever had a steamy one-night stand with a British football player and then find yourself pregnant with his baby, you know how Lia Ward feels.
To be fair, Lia didn’t know who Jude McAllister was when they met.
Studying abroad for her master’s program, all she knows is that she’s a little lonely and he’s very charming, even as they have an epically sexy argument about which type of football is superior.
In Jude’s mind, shagging the feisty American girl is exactly what he needs. He’s been fighting the clock of his long-standing football career and the younger players primed to take his position. Proving that he can feel like his old self again—something he’s been trying to do with everyone in his life—should be easier after blowing off steam with Lia.
But oh baby, when a plus sign pops up on Lia’s pregnancy test, that ‘one night’ becomes a whole lot more.
Now Lia and Jude have to navigate their impossible-to-ignore chemistry, and prepare for the parenting game, something neither of them know how to play.

“All the English countryside stars for this awesomeness. It’s getting one of my rare 6 stars…

I’ve read over 400 books this year and have only given 8 x 6 stars so that tells you just how much I loved this book!!” – Claypot Reads

“Karla Sorensen nailed the angsty and steamy feels once again in Floored. This unique sports romance was full of intense emotions and all consuming romance goodness. She never fails to bring out the best and the worst in me with her brilliant writing.” (PP’s Bookshelf)

“Karla Sorensen delivers on all the things I love the best: the chemistry, the banter, the sweet steady burn that holds my heart in thrall and keeps my greedy little reader heart hungry for more. Floored delivered on all those things and more!” (Jennifer, Goodreads Review)

Lia was excited to be able to spend a semester abroad at Oxford. She is very close to her siblings so even though she knew she would miss them the depth of her feelings surprised even her. This is how she finds herself enjoying a night out when she meets Jude. Even though they just met the sparks fly and they spend a steamy evening together next expecting to see each other again.

As close as Lia is to her family Jude isn’t. He is a star football player who is coming to the realization that his career may be coming to a close and he is uncertain about what the future holds. When he finds out that he is going to be a father because of their night together he is determined to ensure that their child will have the happy childhood that he didn’t. Between her family in the US and his career in England they must decide what the future holds not only for them but for the child they are expecting as well.

Humorous interactions, hot chemistry, two characters that are shaped by their pasts and a great cast of secondary characters make this a story you don’t want to miss. 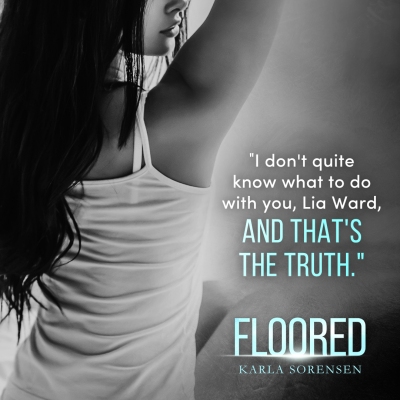 Well, let’s see … I’m a wife and a mother. If the things that I write bring a smile to someone’s face, then I’ve done my job. I am obsessed with Outlander (both the books and the show). I’m almost exclusively a romance reader, which means some people will never consider me a literary snob. If I could meet one historical figure, it would be Jane Austen. I received my Bachelors in Public Relations and worked in health care marketing before I had my babies. I hate Twitter. I do it, but I hate it. Also, if you want to get on my good side, bring me wine and I’ll love you forever.