Skip to content
karisbookreviewsandrevelations Uncategorized December 29, 2020December 30, 2020 2 Minutes
Title: Out of the Storm 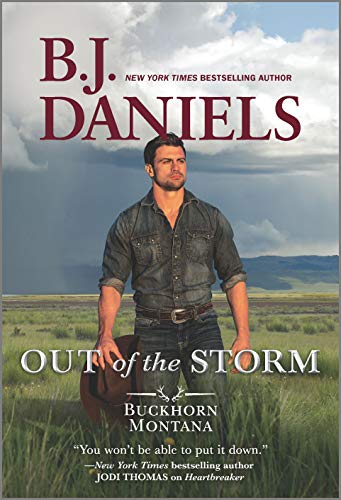 Blurb
She can’t lose him again…One look at his warm brown eyes and Kate Jackson knows she’s found her husband. It’s been twenty years since Daniel went missing in a refinery explosion and was finally declared dead, but Kate never gave up hope, convinced he was somewhere out there, suffering from amnesia. Then, on a trip to Buckhorn, Montana, she sees him—working as a carpenter, scarred, but still her Danny. Yet Jon Harper, as he calls himself, insists he’s a stranger.

Jon is certain he’s not the man Kate’s looking for. Though some of his memories are lost in shadow, how could he ever forget a woman like that? One thing Jon’s instinct does tell him is that she’s in danger from the very person she should trust most. Helping loyal, lovely Kate will mean exposing his own perilous past…but it’s the only way to protect her and this new chance at forever.

Lose yourself in the brand-new Buckhorn, Montana series, from one of the most beloved and bestselling authors of Western romance!

Kate was only a teenager when she fell in love with Danny but that didn’t mean that it wasn’t enduring and true. When her husband was believed to have passed away due to a workplace accident, she found herself a widow and a single mother to two young children. She picked up the pieces of her life and two decades later is engaged to another man, but she has never forgotten her first love.

Collin is Kate’s fiancé, and he has arranged a road trip through Montana to Canada to pick up a wedding dress he ordered for her. When they find themselves stranded in Buckhorn, it may be the best thing that could have happened to her, but it is the worst thing that could have happened to him. She believes that one of residents may be her husband but uncovering the truth could have devastating consequences for everyone.

This story takes us on an action-packed adventure filled with intrigue, surprises and a love that can overcome anything.