Property of The Mountain Man 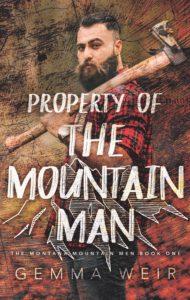 Tall, dark and muscled like a god, Beau Barnett is great with an axe. Every woman in Rockhead Point wants a taste of the mountain man. Including me.

Except he doesn’t even know my name. I’m just the girl behind the counter filling his coffee, while he grunts and grumbles, barely making eye contact.

Then a newcomer with a charming smile and a fancy suit shows up in Rockhead Point, and refuses to take no for an answer when he asks me to dinner.

That’s when I find out Mr. Mountain Man not only knows my name… he thinks I’m his property.

Bonnie has had feelings for the brusque, sexy and much older outdoorsy man since she was a teenager but doesn’t believe he would ever feel the same way. So rather than living the life she wants with him she finds herself standing on the sidelines until another person enters the picture and it changes everything.
In his heart Beau has believed that Bonnie is his for a long time, but he always believed he had time until an outside threat forces him to take matters into his own hands. He will show her with his body and his words that they have always belonged together.
The chemistry between them radiates off the pages and although they had a few adjustments along the way there is no denying that the only place they belong is with each other.