🎧Wrangling The Cowboy from Kennedy Fox on Audio!🎧

Bull riding is all Gavin’s known for years, but when it’s time to retire, he can’t let go of the reckless lifestyle. He finds a job that brings him to a small-town Texas ranch and face-to-face with the woman who snuck out after their one-night stand.

She can pretend she’s over him, but he’s not letting her go that easily.

Maize Bishop spends her days cooking and baking for her family’s bed and breakfast. The last thing she has time for is a relationship, especially when there are no single men within a hundred-mile radius. When a mysterious newcomer flirts with her over drinks, she gives in to his mesmerizing green eyes and goes home with him.

Now that he works for her family’s ranch, she’ll avoid him at all costs.

There are only so many places to hide, and keeping her distance is easier said than done. After months of giving her space, Gavin’s tired of waiting for Maize to admit what he knows they both want – a second round between the sheets. It may only take eight seconds to win a championship, but he’ll prove to her that he can go all night long.

She’s too young, he’s too arrogant, and together, they’re electric – the perfect recipe for disaster.

Wrangling the Cowboy is a complete stand-alone and can be listened to without listening any of the other audiobooks or series, but if you prefer to listen in order, start with Hitching the Cowboy as the characters and families do interconnect. 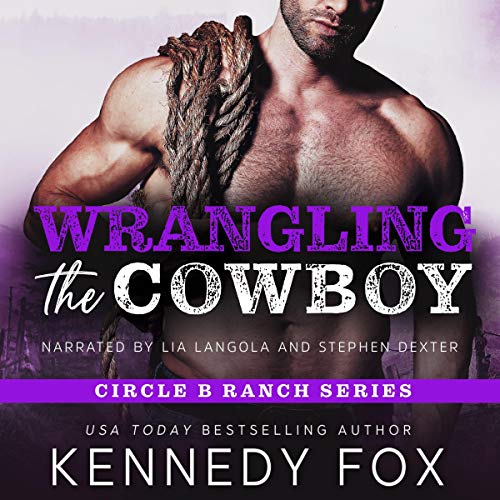 The time has come for Gavin to leave his rodeo career and the lifestyle that goes along with it in the past. He has come to town to pursue an opportunity at the Bishop ranch, but Maize was a surprise he wasn’t expecting.

Maize isn’t looking for love or a relationship especially with a cowboy. When she meets Gavin the sparks fly into a night neither of them will ever forget however she had no intention of ever seeing him again so finding out he is now working on the family ranch was a revelation she could have done without. Maize was determined that one night was all they had but Gavin was just as determined that one night was not enough. Let the battle begin!

The perseverance that Gavin showed as he tried to prove to Maize that he wasn’t only there for a good time but a long time was inspiring to watch and although she was reluctant fighting the chemistry and feelings between them was a fight she wasn’t going to win. The narrators were a perfect choice for the characters as they brought out the heat and humor of the story.