🎧Checkmate: This Is War: The Checkmate Duet, Book 1 from Kennedy Fox on Audio!

Travis King is the worst kind of a**hole.

He taunts me for being a good girl and mocks my high standards.

And I hate him.

It wouldn’t matter so much if he were avoidable.

But considering he’s my older brother’s best friend and roommate, I see him more than I’d ever want to.

His sculpted abs and gorgeous eyes are wasted on such an arrogant man, which makes me hate him even more.

Even though I’ve had a crush on him since I was 10, the feelings weren’t mutual and he’s made that very clear.

He’s always loved getting under my skin, and one night against my better judgment, I let him in my bed.

I’ve succumbed to his manw**re ways, but that doesn’t change a thing.

Because the King is about to get played at his own game – and lose. 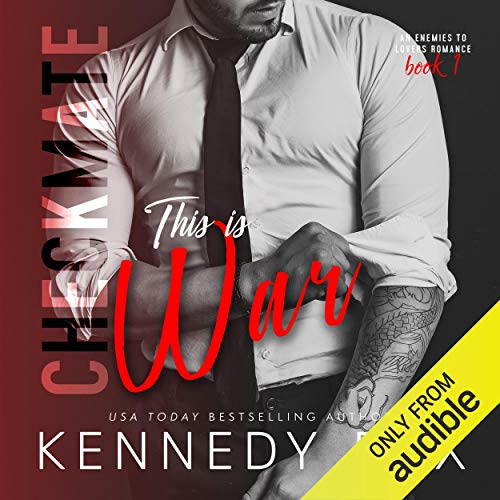 When they were kids Viola thought that she and Travis, her brother’s best friend, understood each other in a way that no one else in their lives did until the day that their relationship changed and would never be the same again. With her brother out of town she now finds herself roommates with Travis and the sparks are going to fly.

Travis has a way with women, but he keeps his relationships casual and short. He has perfected the art of doing whatever he can to draw the ire of Viola both with actions and with words. He is determined to deny the chemistry between them until he can’t and just when you think they may be able to overcome their past life throws them a curve ball that leaves us needing the rest of their story.

Their interactions are humorous, the heat between is hot and Viola is fierce, but she has her mind firmly made up about Travis however there is so much more to the man than first appears. I really enjoyed the performance of the narrator and didn’t miss the fact that it wasn’t a dual narration.