It’ll take a tough woman to win this Hard Hart…Krista Matthews, a hard-headed, hard-fighting rookie cop, is determined to prove herself on the force. It’s not just a man’s world anymore and she’ll show them all she’s up to the challenge, even if it means putting up with the advances from her lecherous mentor, Myles Slade. However, Brock is even more stubborn than she is, he’s all male, all alpha—and whether she likes it or not he’s made keeping her safe his number one priority. He doesn’t realize she doesn’t need protection; she can take of herself and then some.Brock Hart, bodyguard and retired special operative, has never known anyone like Krista. Ever since their first meeting, when she pulled him over for speeding, he’s been drawn to her. She infuriates him, challenges him, and has gotten under his skin in a way no woman ever has. He’s kept people at arm’s length all his life for good reason, but Krista won’t stand for it. She wants to know everything about him, and that puts him on edge. But one drunken night together changes everything. Their worlds are rocked, and Brock’s quiet, introverted life is threatened forever. Which may be exactly what he needs. 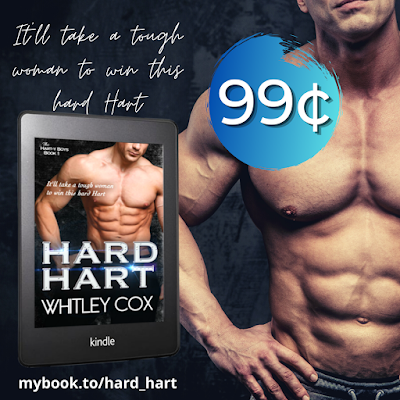 “Once again Whitley Cox connects two unlikely characters into a love story that keeps you on the edge of your seat. Krista and Brock may be instantly connected by one night of drunk passion but that does not stop the two very different people from making the most of their time together. Then throw in the danger that seems to follow Krista and makes the introvert Brock open not just his home but also his heart and you have an emotional read that had more twists and turns than a roller coaster. This is one ride that I did not want to get off of. With a storyline that had me from the opening pages and the heart warming characters you could not help but fall in love with them, this is a book you do not want to miss.” (Nicki ~The Overflowing Bookcase ~ Goodreads Reviewer)

“Wow, what a book! It was an absolutely fantastic and enjoyable series starter! This story had me hooked from the beginning and kept me on the edge of my seat from start to finish. It is well written with a well-developed plot, moves along at a brisk pace and is quite the page turner. The violent suspense, action, witty banter, and talk of sexual abuse had my heart racing. The characters are amazing and perfect; the side characters also add to the high level of excitement. The intimacy between Brock and Krista is smoking hot and intense. This book is guaranteed to knock your socks off. It could not have been better in my opinion. I am looking forward to reading book 2.” (Debra Richardson ~ Goodreads Reviewer)

“I am a big Whitley Cox fan. I don’t care what she is writing about, all I know is that I want to read it.
She has an ability to write two completely different characters and mesh their lives together ending up with the perfect couple.
Brock and Krista should probably never have met, let alone become a couple. But even though what they have together is so very far from smooth sailing, I liked how they worked together to be with one another.
There is plenty going on in this story. I couldn’t wait to read two certain people meet their fate.
Brilliantly written as always and I can’t wait to read Whitley’s next book.” (Sharon Jones ~ Goodreads Reviewer)

She pushed her backside into his growing erection and giggled when he groaned, bucking into her.

He bent her over, pulling her pajama pants and underwear down in the process. She kicked out of her pants and then stood there, her fingers kneading the soft leather of the couch as Brock’s capable hands massaged and caressed her craving backside.

Was it too early to ask him to spank her? She’d have to put a pin in that and see. Because one thing for sure, Krista liked it a little rough. Liked a little pain with her pleasure.

He gripped both her hips, positioned himself behind her, and then drove home. She let out a soft grunt from the impact, but damn if it didn’t feel good. She loved this position, which was ironic given how submissive it was and how in control she liked to be. But they wouldn’t finish like this. This was just the beginning. She squeezed her muscles around him as he pushed into her.

God, how she’d needed this.

Lost in the moment, she reveled in the feeling of Brock deep inside her, filling her, fulfilling her. The spank came out of nowhere, startling the daylights out of her. She yelped and then fell face first into the couch, her arms flying out from under her and causing Brock to slip out.

“You okay?” he asked, helping her up.

She looked back at him and smiled. “Yes. Again.”

Triumph, wicked and primal, glimmered in his green eyes. “Sorry, I should have asked first.”

She shook her head. “No. I want more. Harder.” She assumed the position and he was back inside her in seconds. Three hard, lightning-quick smacks had her panting and pushing into his palm, grinding her backside up to reach his pelvis. Her pussy dripped down her thighs, and her legs shook from his power.

He was having a hard time holding on. His grunts and wavering patterns said he was riding that beautiful edge between insanity and pure bliss. But she wasn’t quite there, and she wanted to be on top.