Title:  Back In The Texan’s Bed 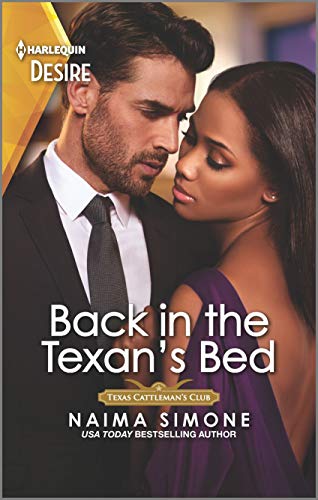 Blurb
He’s going to claim his child and the woman who got away…from USA TODAY bestselling author Naima Simone.

Will they ever learn…

that giving in to desire is playing with fire? After discovering he has a secret son, oil heir Ross Edmond isn’t letting Charlotte Jarrett walk away again. He proposes they move in together—to share their son…and a bed. But Charlotte has secrets, and Ross doesn’t know the real reason his family’s former chef left town three years ago—and they still have a powerful enemy who could bring them both down…

Visit Royal, Texas, and find out if the Edmond family is all that they seem in Texas Cattleman’s Club: Heir Apparent.

Abandoned by his mother as a child and determined to not follow the same path as his father when it comes to woman he has instead focused on his career. Only one person was able to penetrate the walls around his heart until she left with no warning or further contact. Having her reappear in his life with a son he didn’t know he had is a betrayal he finds hard to forgive.

Charlotte used to work for his family and fell in love with Ross but not everyone was happy they were together. She has returned to Royal and maybe if they can work through the hurt and misunderstandings of the past they can become the family they were destined to be.

Time nor distance has diminished the chemistry and connection between them and although their love had been tested they showed it was unbreakable.