Hardened firefighter, Trish “Mac” Mackenzie rappels off buildings, saves kids in a car accident and carries victims out of raging fires. But her personal life is a mess. Can Mac fight her way out of abuse and insecurity with the Sisters of Fire, a skilled counselor, and good-guy, kindergarten teacher Nathan Mitchell at her side? 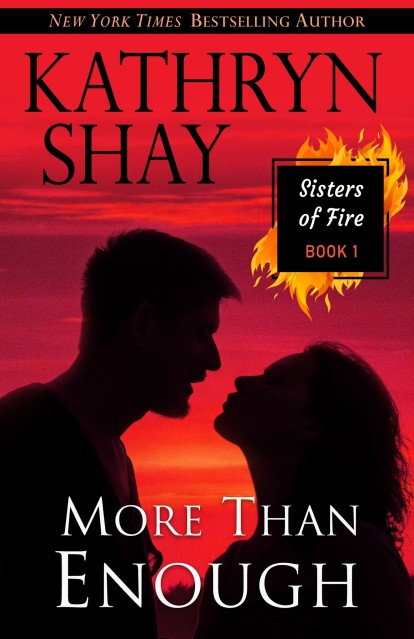 Goodreads Review – “What a great start to the new Sisters of Fire Series.”

Goodreads Review – “I couldn’t stop reading this story, and was frequently moved to tears.”

Goodreads Review – “Once again Kathryn Shay has out done herself!!!”

A NEW YORK TIMES and USA TODAY bestselling author, Kathryn Shay has been a lifelong writer and teacher. She has written dozens of self-published original romance titles, print books with the Berkley Publishing Group and Harlequin Enterprises and mainstream women’s fiction with Bold Strokes Books. She has won many awards for her work: five RT Book Reviews awards, the Bookseller’s Best Award, Foreword Magazine’s Book of the Year and several “Starred Reviews.” One of her firefighter books hit #20 on the NEW YORK TIMES list. Her novels have been serialized in COSMOPOLITAN magazine and featured in USA TODAY, THE WALL STREET JOURNAL and PEOPLE magazine. There are over ten million copies of her books in print and downloaded online. Reviewers have called her work “emotional and heart-wrenching.”

Starting from her childhood Mac has never felt love or support which is why she doesn’t believe she deserves better than her current relationship with her boyfriend.   She is an accomplished firefighter, but her dreams lay elsewhere but she doesn’t believe she is capable of achieving them.    She has a close group of friends however she keeps her secrets private until the events of one night catapult Mac into making some long overdue changes.

Nathan finds his career as a teacher fulfilling even if not everyone agrees.   He meets Mac as they have family  in common  and as she is in a relationship, he knows that friends is all they can be.     The events of one night change everything and he is determined to show her the love and support that she has always deserved.

The struggle and growth of Mac’s character was authentic, and Nathan was patient and understanding as he allowed their relationship to progress at the pace she needed.    I am looking forward to the stories of the members of the Sisters of Fire.