Title: Rogue Suit
A Cocky Hero Club Novel
Author: Crystal Perkins
Genre: Contemporary Romance
Release Date: May 23, 2021
Vi Keeland and Penelope Ward are excited to bring you the Cocky Hero Club: original works from various authors inspired by Keeland and Ward’s New York Times bestselling Cocky Bastard series.
BLURB
I’ve run this office effortlessly for five years, just waiting for my boss to retire and recommend me for his job. Now, the time has come, but my future is no longer guaranteed. All because of him.
Royce Shaw. A pretentious name for a rule-breaking jerk. He’s here to challenge me for the job that should be mine, yet he treats it like a joke. No tie, no regard for appointments, and no idea that I want him as much as I want to hate him.
What’s a guy to do when an injury ends his basketball career early? If you’re me, you fall back on the business degree your father insisted on. I don’t want this job he’s pulled strings to give me a chance at. At least, not until I meet her.
Annika Moore is buttoned up, stuck-up, and definitely not my type. She glares at my clothes, ignores my suggestions, and keeps me in a constant state of arousal every single minute of the work day.
Fighting for the job means one of us will have to lose, but we might just win at love once all is said and done.
Rogue Suit is an enemies to lovers/office romance inspired by Stuck-Up Suit.
ADD TO GOODREADS 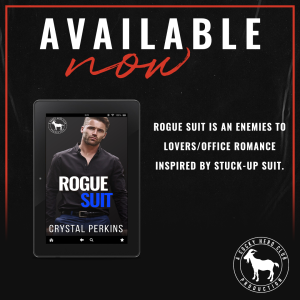 She lived in Las Vegas for over a decade, where you could find her running author events and winning bookseller. After moving to ND for over a year, she’s back in Vegas again. When she’s not reading a few hundred books a year or chasing after her grandson, you can find her watching hockey (Go Knights Go!) and trying to find the perfect shade of lipstick.

She loves Star Wars AND Star Trek, but if pushed to choose, it will always be Leia and her crew who come out on top. Her love of all things nerdy comes through in her book characters, no matter the genre. A mac and cheese connoisseur, she travels the world looking for the perfect version, while attending book conventions and signings as a cover for her research. Poutine research is also conducted regularly on her trips.

Her first series, The Griffin Brothers, followed four billionaire brothers, and the third book, Creating a Love, was a finalist for a multicultural award in 2014. Her second series, Corrigan & Co. featured a secret society of female spies in Las Vegas. She followed this with Society Girls, which offered a glimpse into the training of the women who are recruited into the Corrigan & Co. Foundation, and the Society. The Company Men series featured the relatives of her secret society of spies. Activate is a Young Adult Sci-Fi standalone novel, and A Kiss Is Just a Kiss is a Romantic Comedy standalone book. If you like something darker, you can find her Horror short stories in the Never Fear anthologies!

She’s currently writing about modern day witches in her Burn series, and bridesmaids for hire who solve mysteries in The Maids!

Crystal loves hearing from her readers, so please feel free to send her an email, Facebook message, or Tweet! She’s also on Instagram, where you can see her monthly reads! 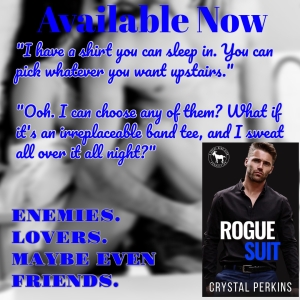 With her boss about to retire Annika believed that his job would be hers only to find out that she is competing with Royce. He has recently been hired and has no experience so she believes that he is no match for her but she never counted on her attraction to him or his determination to win.

Due to an injury that could end his basketball career Royce finds himself competing for a job he didn’t really want. When he meets Annika the sparks fly and he is about to show her that she has met her match both personally and professionally.

Humorous interactions, hot chemistry and two compelling characters that have you rooting for them and their happy ever after.