When We Touch by Carrie Elks

When We Touch is the fifth book in the Heartbreak Brothers series of emotional standalone romances,

set in the small town of Hartson’s Creek.

What reviewers are saying! 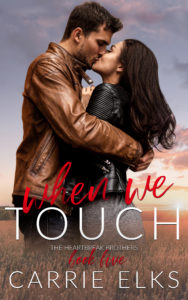 There’s a thin line between love and hate… and they’re about to cross it.

Becca Hartson should be used to moody men by now. She grew up with four overprotective older brothers, after all. But nothing could prepare her for the hostility she encounters from her new boss – the annoyingly gorgeous Daniel Carter.

Sure, his first impression of her was bad. She was in the arms of his brother, crying into his shirt. But the whole situation was purely platonic and Daniel knows that.

It doesn’t stop him from scowling at her every time they work together. Or from sending her heart into a crazy spin.

But if she wants to keep this job, she’ll have to grin and bear it.

Coming back to work at his family’s distillery after six years away was a mistake. Daniel knows it from the moment his gaze clashes with Becca’s. With her tumbling waves and soft smile, he knows she’s trouble from the start.

But when Becca looks at him with those sweet doe eyes, he keeps forgetting how to hate her… 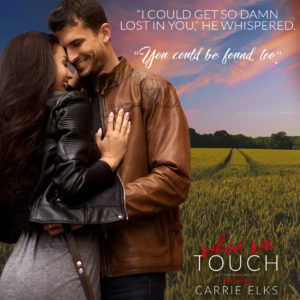 “Taste it,” he murmured. This was a bad idea. She knew it as soon as his gaze caught hers. She slowly lifted the glass to her lips. He held his breath as she tipped it back, her mouth parting to allow the whiskey to flow over her tongue. She closed her eyes, her jaw moving as she savored, her cheeks pulling in as she swallowed. When she opened them, he was still staring at her.

His gaze dipped to her throat, watching it undulate.

“It’s soft. Not too delicate but not too overpowering. There’s hints of vanilla. Not too sweet, just enough to make it feel like the whiskey’s dancing on my tongue.”

“Can you taste the almonds?”

“At the very end. It has a long finish. There are almonds and salt there. They’re sticking to my tongue. It’s delicious.”

Every time their eyes clashed it felt like her skin was on fire. This weird, sensual connection between them was so much stronger than before. It felt like it had been distilled until it was almost overpowering.

Her breath caught in her throat, making her chest lift up with the need for air. Daniel’s piercing blue eyes flashed like there was a fire igniting behind them. Neither of them said a word – she wasn’t sure she could speak even if she wanted to.

There are moments when your body knows things that your mind isn’t ready to consider. When every cell in your muscles ache to do the one thing your rational thoughts are screaming against. Becca’s free arm slowly lifted up, reaching for him, her fingers desperate to feel the roughness of his jaw.

In an instant, his own hand shot up, fingers curling hard around her wrist, making her stop an inch short of his face. His grasp burned her, so tight it felt like a vice.

Between her job, her boss and her family Becca is happy with her life so finding out her boss was leaving and that his gruff and grumpy brother was taking over wasn’t a welcome surprise. Their first meeting wasn’t under ideal circumstances, but he is about to find out that she may looking sweet and demure but doesn’t back down from anyone or anything.
Daniel has recently returned to town and he is a private man who wants to ensure this past remains that way. Against his better judgement there is something about Becca that is breaking through the walls he has built around himself, but will he be willing to open his heart to the life they could have together?
Becca may challenge Daniel unlike any other, but she also supports him the same way. She shows him that love and emotion is a strength not a weakness and that is what makes their relationship so special.

Carrie Elks writes contemporary romance with a sizzling edge. Her first book, Fix You, has been translated into eight languages and made a surprise appearance on Big Brother in Brazil. Luckily for her, it wasn’t voted out. Carrie lives with her husband, two lovely children and a larger-than-life black pug called Plato. When she isn’t writing or reading, she can be found baking, drinking an occasional (!) glass of wine, or chatting on social media.