Title: Tormented Bastard
A Cocky Hero Club Novel
Author: Eliza Peake
Genre: Contemporary Romance
Release Date: May 30, 2021
Vi Keeland and Penelope Ward are excited to bring you the Cocky Hero Club: original works from various authors inspired by Keeland and Ward’s New York Times bestselling Cocky Bastard series.
BLURB
Eden
I’m organizing New York’s biggest charity event of the year. But when the keynote speaker drops out, the success of my business hangs in the balance.
There’s one man who can help me. And no, I’m not above flying to the middle of nowhere to plead with the baseball legend in hiding.
All I need is a yes.
I didn’t expect his hostility. I didn’t expect a hurricane to trap me alone with him. And I didn’t expect to find that he still owns my heart after all this time.
Chase
I left New York two years ago with my life and superstar career in shambles. All I want is solitude and peace to heal and start a new business, a new life, a new me.
Then Eden shows up, asking for the impossible. If I could say yes, I would. She doesn’t know the whole truth about my downfall. And I don’t want her to know.
To save us both, I will have to remind her I’m the bastard who hurts the ones he loves.
Tormented Bastard is a second chance/sports romance inspired by Cocky Bastard.
ADD TO GOODREADS 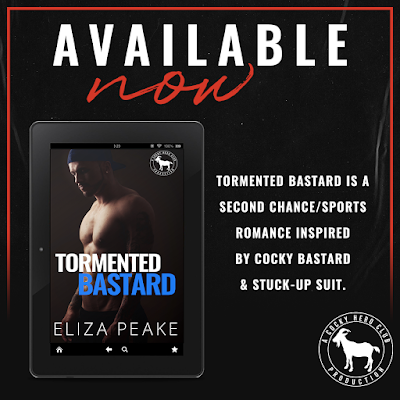 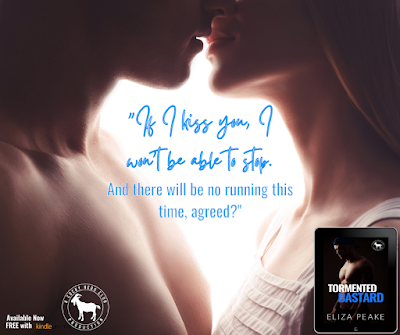 Eliza Peake is an international bestselling author of sexy, swoon-worthy contemporary romance. She writes stories with sassy heroines, heroes who love their women in all the right ways, and happily ever afters with all the feels. She also co-hosts The Misfits Guide to Writing Indie Romance podcast.
In her downtime, she reads all the panty-melting romances she can get her hands on, drinks gallons of coffee, and tries to wrangle her addiction to Mexican food.
She currently resides in North Georgia with her family and dreams of retiring to the beach someday where she will continue writing steamy romance stories to her heart’s content. 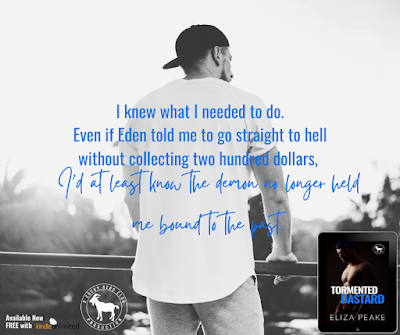 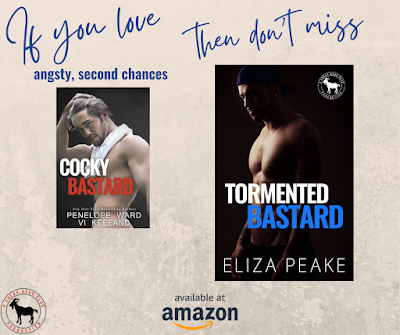 When Chase’s life imploded both personally and professionally he knew that the only way to save himself was to leave that life behind. He was content with the new life he created for himself far away from the limelight until Eden, his first love, tracks him down looking for a favor that he might not be able to give.

Eden is an event planner who finds herself in a dire situation when the speaker she planned for a charity event isn’t able to attend. She doesn’t have a lot of options so even though she and Chase didn’t end on the best of terms she is determined to convince him but she never expected the complications that would go along with it.

This is a story of two people who have always belonged together who allowed the demons of the past to draw a wedge between them. They must decide if the love they have is strong enough for them to fight for a future together.