Loved You Once by Claudia Burgoa is NOW IN AUDIO! 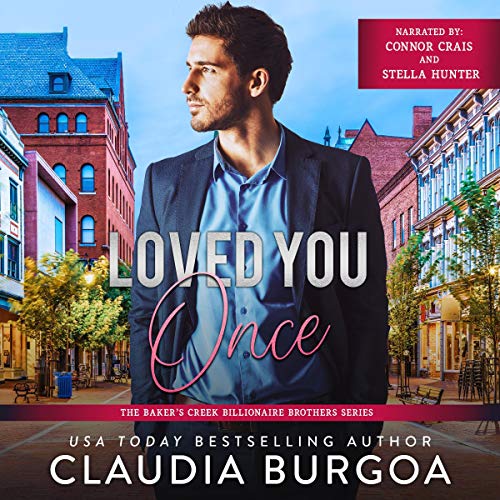 After a week off the grid, I finally get reception and the first voicemail I hear stuns me.
“You’re summoned to Baker’s Creek by the late William Tower Aldridge.”

Twelve Years.
It’s been twelve years since the last time I heard from the Aldridge family.
That one voicemail changes everything – I need the money the late William offers.
In exchange, I have to live eighteen months in Baker’s Creek.
I’ve survived cancer, the jungle, and the plague.
This should be easy compared to all that, right?
Or so I think until…I see him.
Confident, charismatic, bitter, sexy as hell, Doctor Hayes Benjamin Aldrige.
My first love, my first kiss – my late husband’s brother.
He hates me.
He still hasn’t forgiven me for walking out on him, and I can’t blame him. It’s been over ten years, and I still have feelings for him.
But I faked it once and I can fake it twice.
I can survive eighteen months and that’ll be the last time I see the Aldridge brothers.

The Baker’s Creek Billionaire Brothers series is a romantic comedy saga packed with the perfect mix of angst, tears, and laughs. If you like strong heroines & alpha males, steamy romances and witty love stories, this series is for you!

There is no denying the professional success that Hayes has enjoyed as a surgeon, but his personal life is another matter. When he finds out that the father he has distanced himself from has passed way he and his five other brothers are called home where he finds out the dire plan his father has for the town. It not only requires they he and his brother must reside in the family estate but the same is also required of the only woman he has ever loved who is also his brother’s widow.

Blaire is a woman with a huge heart who has endured so much in her life. She has loved and lost and now puts all her energy in ensuring the well being of others. She and Hayes were college sweethearts until he broke her heart when he left to pursue his career without her so will abide by the terms of the will but she isn’t about to let him into her heart or her life for a second time.

Hayes is determined to show Blaire that ending their relationship was the biggest mistake of his life and all he wants is a second chance to show her that she can trust him and along the way he may find the family he never had. The performance of the narrators not only had you in invested in Blaire and Hayes but all the secondary characters as well.