In the highly anticipated sequel to her first contemporary Western Romance, Rough Creek, Kaki Warner returns to the eponymous Texas town and to Whitcomb Four Star Ranch. HOME TO TEXAS follows KD Whitcomb as she struggles to find her purpose after a devastating loss. Grappling with her newfound military veteran status and plagued by survivor’s guilt, KD undergoes a journey of healing while finding love in the unlikeliest of places.

Lieutenant KD Whitcomb always wanted to be a soldier so when she’s forced back home with a debilitating injury and an honorable discharge that doesn’t feel earned, she struggles to reintegrate into small town Texas life. KD resents her inability to cope with her trauma but gains a newfound sense of purpose when her counselor suggests she open an equine therapy facility. If the beautiful horses of her family’s ranch can help fellow veterans heal, maybe they can heal her too, along with Richard Murdock, the disarming man who KD finds herself falling for against her better judgment.

First, she has to get through an investigation of her conduct in the incident that ended her military career by Warrant Officer Richard Murdock. KD and Richard are wary of each other from the start, but beneath Richard’s mistrust and KD’s snarky attitude lies an undeniable attraction. Richard is shocked to find that he wants a real future with KD. What better place to start that future than Whitcomb Four Star Ranch?

When a deadly enemy follows them to Whitcomb Ranch and threatens their newfound bliss, KD and Richard must work together to protect the ranch and each other. 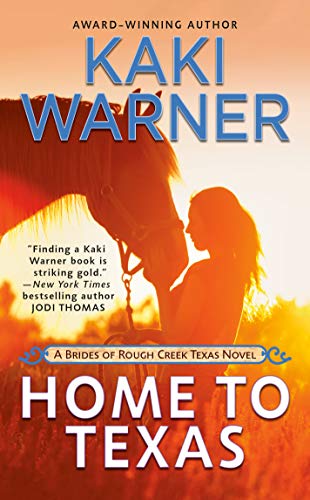 Kaki Warner is a RITA-winning author and longtime resident of the Pacific Northwest. Although she now lives in the eastern slopes of the Cascade Mountains in Washington, Kaki grew up in the Southwest and is a proud graduate of the University of Texas. She spends her time gardening, reading, writing, and making lists of stuff for her husband to do, all while soaking in the view from the deck of her hilltop cabin.

After the devastating outcome of her last mission in Afghanistan KD finds herself trying to heal both physically and emotionally while she tries to uncover the truth of what happened as she faces a new life without the military.

Richard has been tasked with investigating what happened but with everything he learns he finds out he has more questions than answers. The situation is further complicated not only by the kinship that he and KD feel for each other but also that the threat that started it all may not be over yet.

KD and Richard take us on a journey filled with intrigue and romance as they fight to overcome their pasts and have the future that they both deserve.