Kept By The Mountain Man by Gemma Weir

Check out the Series – FREE in KU 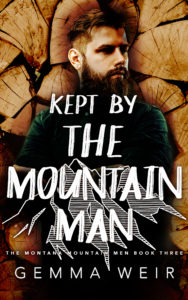 Kind, insistent and refusing to go away, Granger Barnett is one of the most gorgeous men I’ve ever met. I imagine every woman in Rockhead Point wants a taste of the mountain man. Except me.

When my RV breaks down, he shows up like the good Samaritan ready to save me, only I’m not looking for a hero. But it turns out no isn’t a word Granger hears that often, especially not from the woman he thinks is meant to be his.

Only apparently the Barnett brothers know how to get their own way. So now I’m staying at his house and he’s talked me into giving him the weekend to convince me I’m his.

But while I’m planning my great escape, I realize he doesn’t just want the weekend, he wants to keep me forever. 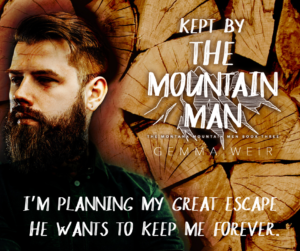 Check out Book 1: Property of The Mountain Man:

Check out Book 2: Owed By The Mountain Man:

Alice past has shown her that what she gives to others isn’t enough for them to want her to be a permanent part in her life, so she has decided she is destined to be alone. She is a vagabond who goes wherever the urge strikes but when she finds herself stranded on the side of the road that is about to change.
From the moment that Granger saw Alice he knew that she was meant to be his and not just for right now but forever. He will do whatever is necessary to prove to her that the only place she belongs is with him.
When it comes to love Alice has only known pain and disillusionment, but Granger shows her with every thing he says and does that she is perfect just the way she is.