Title: A Nine-Month Temptation
Series: Brooklyn Nights #1
Author: Joanne Rock
Publishers: Harlequin Desire/Mills & Boon
HarperCollins AU
Genre: Contemporary Romance
Release Date: June 29, 2021
BLURB
One night rocked their world.
Now can they tame their passion for their baby’s sake?
Ever since their mind-blowing encounter months ago, fashion CEO Roman Zayn hasn’t stopped hungering for Sable Cordero. But as a rising star in his brother’s design studio, the intoxicating celebrity stylist is strictly off-limits. Even when Roman discovers Sable is pregnant and steps in to offer support, further intimacy between them feels forbidden. But resistance to an attraction like theirs just may prove futile…
From Harlequin Desire: Luxury, scandal, desire—welcome to the lives of the American elite.
Love triumphs in this uplifting romance, part of the Brooklyn Nights series.
ADD TO GOODREADS 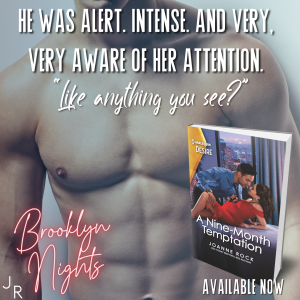 AUTHOR BIO
Four-time RITA nominee Joanne Rock has never met a romance sub-genre she didn’t like. The author of over eighty books enjoys writing a wide range of stories, most recently focusing on sexy contemporaries and small town family sagas. An optimist by nature and perpetual seeker of silver linings, Joanne finds romance fits her life outlook perfectly–love is worth fighting for. A frequent speaker at regional and national writing conferences she enjoys giving back to the writing community that nurtured and inspired her early career. She has a Masters degree in Literature from the University of Louisville but credits her fiction writing skills to her intensive study with friend and fellow author Catherine Mann. When she’s not writing, Joanne enjoys travel, especially to see her favorite sports teams play with her former sports editor husband and three athletic-minded sons.
AUTHOR LINKS
FACEBOOK
TWITTER
INSTAGRAM
PINTEREST
AMAZON
BOOKBUB
NEWSLETTER 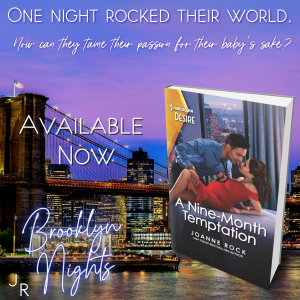 After her marriage ended through no fault of her own Sable decided to put the careers plans that she had placed on hold into action, and she now finds herself working for Zayn Designs as a stylist. She isn’t looking for a relationship but from her first meeting with Roman the sparks fly but she didn’t expect their one night together to forge a connection that they aren’t able to walk away from.

Roman is Sable’s boss’s brother and provides the financial backing from the company. There is no denying the chemistry between them, but he has loved and lost and isn’t about to get emotionally involved with another woman. He will play an important role in their child’s life, but he is determined that their relationship will end there.

This is a heartwarming and romantic story about finding love and happiness for a second time as two people who have been hurt for different reasons help each other heal.