It’s been thirteen years since Luke laid eyes on Audrey Wallace. Time has made him bitter and nothing like the boy she used to know. But, no matter how hard he tries, Luke can’t get Audrey off his mind. Will Luke be able to leave their past behind and explore the sizzling chemistry between them? Fans of The Perfect Game by Samantha Christy will devour The Curveball by A.M. Williams, a friends to lovers, second chance romance. 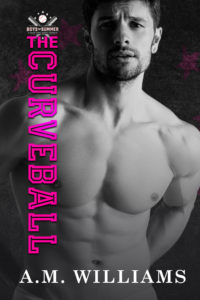 Is thirteen years too long to reconnect with the one that got away?

I never thought I’d see Luke “Voodoo” Kelly again after my parents died when I was fifteen. I was ripped from the only life I knew and thrust into a new one that didn’t involve him.

But thirteen years later, he walks into the bar I’m in with my friends in the last place I thought I’d see him: Somerville.

He looks the same, and he reminds me so much of that boy that I used to know. He’s just as handsome as before and I could still feel our connection.

The only problem? He’s nothing like that boy, and it seems he doesn’t want me in his life anymore.

Audrey Wallace was the one that got away. One day she was there, the next she wasn’t. And no matter how hard I tried, I couldn’t find her.

I never expected to see her in the town I’d just moved to, let alone with my teammates and their partners.

She’s just as gorgeous as I remember, and she acts the exact same.

But I can’t forget what it was like for me after she left, how hard I struggled to claw my way out of my father’s home without her help.

However, no matter how hard I try, I can’t get her from my mind and I realize those feelings from before are still there and stronger than ever.

We have to decide if we can overcome our resentment and fear to get our happy ever after.

The Curveball is book six in A.M. Williams’ Boys of Summer baseball romance series. It’s a second chance, friends-to-lovers romance with a grumpy baseball player and a blast from his past.

If you love men in tight pants and the sassy women they fall for, this series is for you. 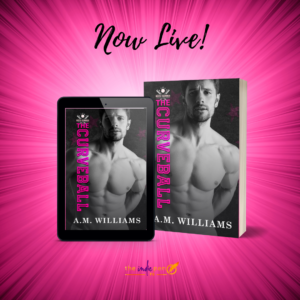 It was dark enough now that I couldn’t make out anything on his face. That was probably a good thing. If he looked anything like I did, he probably looked ravaged at this conversation.

“That hurts,” he admitted.

I nodded. “I know. I’m sorry. I was a selfish asshole then. I never really got over it until I left for the military.”

Luke said nothing for several minutes and I thought the topic was done. But he eventually spoke up.

“What made you join up?”

“A few things.” I sighed as I remembered deciding to join up. “I hadn’t wanted to join. But whatever money my parents had went to paying off debts, and Aunt Sarah said that if I didn’t get aid or a scholarship, she couldn’t help.”

I snorted and shook my head. “I know now that was a bunch of bullshit. I think she wanted me to pave my own way.”

“What do you mean by that?” he asked when I didn’t immediately continue.

“Let’s just say that having seen the contents of my aunt’s accounts, she could have easily paid to send me to college a few times and not put a dent in anything.”

I blew out a breath. “It is what it is. Joining the military was the best thing for me then. I was still in so much pain from my parents’ dying that I needed to get away. The military allowed me to do that, though I ended my career in Goldsboro, a place that’s only a little over an hour from here.”

Neither of us spoke for several long moments. I waited for him to say something else, whether about what I revealed to him or about his own life after I left.

But he gave me nothing as we continued to eat.

“I’m going to head out,” Luke finally said, pushing himself to stand.

I could only stare at him. “What?”

He shook his head and said nothing, walking away from me. I stared after him, trying to figure out what had just happened.

I poured my heart out to him about my parents dying and how much I’d struggled. And he’d just… walked away..

“What the fuck?” I muttered as I watched him say his goodbyes, shaking hands and giving out hugs like he’d been a part of this group for years.

He disappeared around the side of the house.

I looked back to the group and met Zoe’s gaze. She stared at me for a few beats, asking what was up with her eyes.

I had no fucking clue, so I just shrugged.

I knew one thing, though. If Luke thought I was just going to open myself up to him and let him shit all over me, he had another think coming. I’d bared my soul, and he hadn’t reacted.

I was officially done. 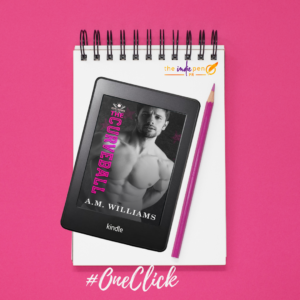 A.M. Williams is just a simple girl from the south that found herself living abroad. When she’s not annoying her cat or reading, she’s spending time with her husband and traveling as much as possible. She has a serious case of wanderlust and wants to go as many places as possible while she can. She loves Cheerwine, sweet tea, and North Carolina (eastern style) BBQ as well as those crystal clear waters on the North Carolina coast.

Audrey and Luke shared a special relationship that went beyond friendship until tragedy struck and life as Audrey knew it would no longer be the same. She finds herself living in a new place with an aunt she doesn’t know while grieving. Her life since then hasn’t been without its challenges but when she finally returns to her hometown more than a decade later, she never expected that it would bring Luke back into her life.

Luke felt abandoned when Audrey suddenly disappeared from his life as due to his home situation, he was closer to her family than his own. When his attempts to contact were unsuccessful and she didn’t try to contact him he moved forward with his life but never forgot the betrayal he felt.

The roads that both Audrey and Luke have traveled since they knew each other has been difficult in their own ways. It is only when they open up their hearts and their pasts to each other that they are truly able to heal.