A holiday entry in the Rookie Rebels series, featuring a player who’s been here from the start . . .

Goalie Erik “Fish” Jorgenson finally gets his shot at love . . . but first he’ll have to figure out what he did to offend the woman he’s had his eye on for some time. Can a little Yuletide cheer get him into her good graces, warm bed, and frozen heart? Or will he fumble the puck and lose his chance?

Join the Chicago Rebels this holiday season and find out if Erik is as good at saving Christmas as he is at saving goals! 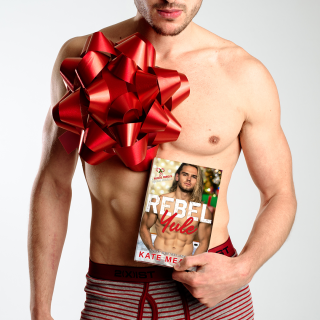 The goaltender of the Chicago Rebels, Erik, isn’t sure what he has done that has Casey ignoring him at every opportunity and all his attempts to find out have failed but thanks to the festive season and a little divine intervention he may just get the answers he needs and so much more.
Casey is the personal assistant for the owner of the team so that means that at times she must interact with the players, which includes Erik, even if she doesn’t want to. She is still trying to heal from some turmoil in her personal life so even if she and Erik are able to mend the rift between them, she isn’t certain she is willing to open her heart up to love again.
There is no denying the chemistry between them as Erik and Casey take us on a heartwarming journey as he is determined to show her that the reward of what they could have together is well worth the risk.