Release Date: October 19
Only one person has ever rocked Detective Shawn Maxwell’s titanium composure.
Francesca Rossi, his ex-partner.
His ex-everything.
He hasn’t seen Frankie since she left him eight years ago and now he has to work with her on an undercover case that could break them both.
But when Shawn’s world is turned upside down by the news that he has a three-year-old daughter, Frankie stuns him by being an unlikely ally.
The more they’re together, the more the walls between them begin to crumble and the less he can resist the fierce, beautiful woman he fell for.
But their past comes with wounds that run deep and the present holds danger neither of them see coming.
Until suddenly, they aren’t just fighting for love.
They’re fighting for their lives.

Frankie is a police officer whose latest investigation brings her back to one of the most painful parts in her life. Eight years earlier an injury on the job not only ended her relationship with Shawn, her fellow officer, but sent her down a path that she has worked hard to overcome. She now finds herself having to work undercover with Shawn and facing the past she tried to leave behind.
Shawn is not only dealing with Frankie coming back into his life, but he also finds out that he has a three year old daughter, Isla, who he knew nothing about. When you throw in the latest case that he finds himself working undercover with Frankie on you know that you are in for a suspenseful and unforgettable ride.
Frankie is strong, independent and determined to right the wrongs of the past while Shawn is a loyal friend, partner and an even better man. The feelings between them haven’t diminished over time and seeing them find their way back to each is action-packed and meant to be. 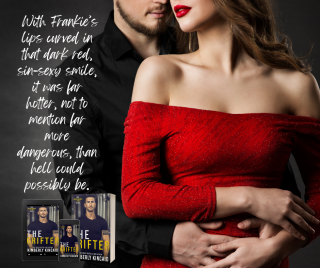 Kimberly Kincaid writes contemporary romance that splits the difference between sexy and sweet and hot and edgy romantic suspense.

When she’s not sitting cross-legged in an ancient desk chair known as “The Pleather Bomber”, she can be found practicing obscene amounts of yoga, whipping up anything from enchiladas to éclairs in her kitchen, or curled up with her nose in a book.

Kimberly is a USA Today best-selling author and a 2016 and 2015 RWA RITA® finalist and 2014 Bookseller’s Best nominee who lives (and writes!) by the mantra that food is love.

Kimberly resides in Virginia with her wildly patient husband and their three daughters.