He’s desperate for revenge… and her.

Navy SEAL Tony “Flakes” Hackenbreg’s career and sanity ride on the upcoming mission to avenge his fallen SEALs. Being forced to partner with the dangerously beautiful CIA agent Elliot Smith is the last thing he thinks he needs. But with her love for explosives, sassy mouth, and a body most men would kill for, Elliot is everything he never knew he needed in a woman. Constantly together, the two shift from enemies to partners before morphing into an undeniable attraction that neither can resist. But keeping Elliot in line and safe on the dangerous mission proves to be the hardest challenge of Tony’s career.
She’s willing to kill anyone who stands in her way… except the one SEAL whose commands she’s eager to obey.
Elliot Smith’s last operation to Colombia cost her everything: her flawless mission reputation with the CIA, her partner, and nearly her own life. With vengeance on her mind, she doesn’t want or need a mouthy, dominant SEAL monitoring her every move like an overprotective babysitter. But when he sneaks past her defenses, making her open up about her past and hopes of a future, Elliot wonders if she’s finally met her equal. When intense tension turns to passion in the middle of a covert mission, will they see the signs of a carefully laid trap?
Blood, sweat, and gunpowder mix a heady cocktail neither can withstand, making each touch and stolen kiss explosive. The enemies turned lovers must work together or their shared enemy will slip through their fingers again—this time with Elliot in his grasp.
Covert Vengeance is a standalone, no cliffhanger, SEAL romantic suspense novel. Each book in the SEALs and CIA Series can be enjoyed on their own; however, because of character crossover, reading the series in order is recommended. This series is suggested for mature readers due to detailed intimate scenes, discussion of abuse, violence, and foul language.
Grab Your Copy Here!

💙Review💙
Elliott is a CIA agent who is still dealing with the devastation that her last mission brought and she is determined to ensure that the guilty party is captured and forced to face the justice he deserves. That means returning to the place where it all happened however the powers that be aren’t about to let her go alone.
Tony and Elliott have a lot in common and that includes the enemy that shaped both their lives. He too is trying to move past his last disastrous mission and if that means working with Elliott so be it.
Neither Elliott nor Tony was looking forward to working with the other, but circumstances soon change as they go from someone being foisted on the other to perfect partners, both personally and professionally, as they take us on an suspenseful adventure you won’t soon forget. 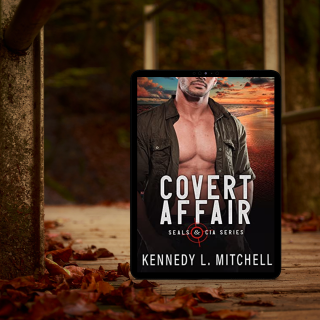 Kennedy lives in Dallas with her husband, son, and 80lb Goldendoodle who still believes he’s a lap dog.
A bookworm at heart, Kennedy loves to snuggle up in bed or by the campfire with an unputdownable book.
She began writing two years ago with Falling for the Chance and has no plans of stopping. Her novels are witty, action-packed, and offer enough steam for a great facial.
If you like strong heroines and sexy, tattooed men who can’t keep their hands off them, then this author is the one for you.
Connect with Kennedy L. Mitchell
Website | Newsletter | Facebook | Instagram | Twitter | Amazon Author Page | Goodreads | BookBub
Hosted By: