We are so excited to celebrate the release of I Hate You More by Lucy Gilmore with you today! 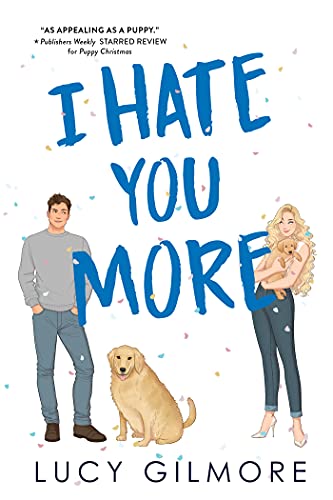 Ruby Taylor gave up pageant life the day she turned eighteen and figured she’d never look back. But when an old friend begs her to show beloved Golden Retriever Weezy at the upcoming Canine Classic, Ruby doggedly straps on her heels and gets to work.

If only she knew exactly what the adorably lazy lump of a dog was getting her into.

If there’s one thing veterinarian Spencer Wilson knows in this world, it’s dogs. Human beings are a different story. Especially gorgeous women clearly in way over their heads. As judge for the local dog show, Spencer advises Ruby to quit while she still can, but her old fervor for winning has returned—and she wants to show the stern, broody-eyed judge that she’s more than just a pretty face. In the end, she’ll show him who’s best in show.

It’s been a decade since Ruby stopped performing in beauty pageants and she has been working as a nursing assistant in a senior home. When one of her residents wants her to show her dog Wheezy in a show what Ruby lacks in experience, she more than makes up for in motivation especially when she meets Spencer, one of the judges, who does everything he can to deter her.

Spencer is a veterinarian who is serious about everything in life but in particular when it comes to the reputation of the dog show. He doesn’t believe that there is any way that Wheezy can complete but spending time with Ruby as she tries to prepare Wheezy may just change the way he looks at life and love.

Both Ruby and Spencer find themselves dealing with their own insecurities and some family drama which only makes them more relatable. There is a great cast of secondary characters including some canines which only make the story better. The narrators did a great job with the story and the characters.