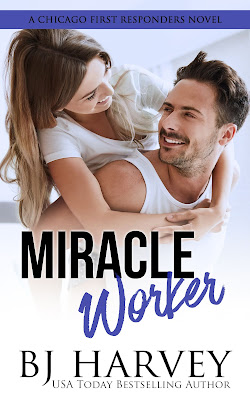 He’s black and white. She’s neon technicolor. But together, they’ll find they’re exactly what each other needs.
***
Firefighter Alexandra Maxwell has lived in the shadows of her family’s firefighting legacy in her small Iowa hometown for most of her life. So when she’s given the opportunity to transfer to Chicago, she jumps at the chance to spread her wings and make her mark in the career she loves.
Chicago cop Gio Rossi enjoys the quiet life. He’s all about his job and his close-knit family. When his brothers offer up his spare room to ‘Alex’, their new firefighter colleague, he definitely isn’t expecting a leather-clad, motorcycle-riding, adrenaline junkie woman to turn up at his door.
Despite trying to fight their growing attraction, when a near tragedy on the job has Alex doubting her judgment, it’s Gio who’s steps up, determined to prove to his strong-willed, independent roommate that showing your soft spot does not make you weak, it simply makes you real.
Can these two unlikely bedfellows find common ground and see what everyone else around them has seen all along, that together, they can work miracles, even if it’s just with each other.
***
USA Today Bestselling Author BJ Harvey brings you Miracle Worker – Book 3 in a new spin-off to the Cook Brothers steamy rom-com series featuring first responders in Chicago who are fighting the good fight and also finding love at the same time. This series can be read as a standalone and is set in the same world as the Bliss, Game, and Cook Brothers series before it.

Deciding to clean up before thinking about what to do for dinner, I grab a quick, hot shower, then wrap a towel around my hips and walk through to my bedroom. I shut the bathroom door behind me, noticing the house is significantly quieter now that there’s not a rock concert being held in my living room.

Moving toward my closet, I pull out some sweats and a tee along with some boxers, and I lay them on the bed. Just as I unwrap the towel and start drying myself off, my bedroom door slams open and Alex bounds in, waving a rolling pin above her head like it’s Thor’s hammer, and she’s ready to attack.

I stare flabbergasted at an equally shocked Alex, her weapon arm falling down to her side, her eyes wide and her chest heaving. My heart thumps against my ribs as I try to calm my own breathing, all the while trying to process what the hell just happened.

Her gaze drops . . . then drops again, before jerking up to my face.

“Ah hell,” I curse, one hand moving to cover my junk, the other blindly grabbing at anything on my bed to cover myself up with. To her credit—and my relief— Alex turns around to face the wall, giving me privacy.

“Didn’t know?” Do I have a third nut I don’t know about?  Just to be sure, I move my hand out of the way to make sure everything is as it should be down there.

A soft gasp escapes her, and looking up, I catch Alex’s deer-in-the-headlights look in the mirror facing my bed, the mirror giving her a full-frontal view of my uncovered body—again. Her cheeks turn pink before she drops her gaze to the ground.

“Didn’t know what, Alex?” I ask again as I quickly pull on boxers then my sweats, making sure the important bits are covered before I can inadvertently flash my new roommate with the goods a third time.

“That you were home. I didn’t hear you come in, and I figured you would’ve said hi or something when you did. So when my music stopped and I heard a door shut and then footsteps, my brain went to the worst-case scenario and defaulted into self-preservation mode.”

“With a rolling pin? Don’t you have pepper spray or something in your purse?”

“No. I just have a whistle,” she says before she turns around to face me. “Hold up. Why are we discussing weapons of choice to use when I mistakenly think there’s someone in the house?”

“’Cause you thought I was a home invader, and instead of running out of the house and maybe calling the cops, you ran in here all hot air and bluster, armed with a kitchen utensil. I think this warrants a conversation.”

“Do you have to be shirtless for it? It’s kind of distracting, that’s all.” She waves her hands in front of her, gesturing to my chest.

“Not like you haven’t seen me already, roomie,” I reply, unable to fight my smirk.

She snickers as she lifts her eyes to mine. “I’m sorry.”

“For accosting me with a weapon of pastry creation or copping a look in the mirror?” I ask with a questioning brow. Her lips twitch up and I frown. “What?”

“Get it? Copping a look?” she replies with a giggle.

I roll my eyes and fight a snort at her goofy sense of humor.

“I kind of just went into fight-or-flight mode.” Her shoulders go back and she glares at me. “Besides, you could’ve at least told me you were home.”

“I tried, you were too busy being mid-hip shimmy.”

“Oh,” she mumbles, her shoulders visible dropping. “I was cooking our first roomies dinner.”

My head jerks back. “That’s a thing?”

She shrugs. “I wanted to say thank you for letting me move in, and since it was the first time we’ve been home at the same time . . .”

“Shit. Okay, well if you’re not traumatized from seeing me naked and dinner’s not ruined because you ran in here like a modern-day Wonder Woman, I’d like that.”

She gifts me a wide, genuine smile, and for a moment, I forget that I’m standing there shirtless in a pair of grey sweats and my new roommate has already seen me naked. Because that smile is dangerous and has trouble written all over it.

She steps forward and holds out her arm to me. “Truce?”

My brows bunch together as I shake her hand. “For what?”

“We’ve only met face-to-face two times, and you’ve already pulled a gun on me, and I’ve stormed in ready to bash you with a rolling pin. I’d say we’re even now.”

“Truce then,” I agree with a nod and a shake of her hand.

Alex steps back and doesn’t hide the full-body perusal she gives me. “Brilliant. Well, not that I’m complaining—because damn, who knew you had that hiding under there?—but growing up, we always ate supper fully dressed.”

I bark out a laugh and shake my head. “I think I can manage that.”

“Awesome. See ya soon, roomie,” she says before turning around and skipping her way out of the room. Stopping in the doorway, she shoots me an amused smirk.  “By the way, shrinkage obviously isn’t an issue. Good for you.”

I’m left standing there with my mouth agape and absolutely no comeback.

And it’s not until Tom Petty starts blaring from the kitchen again that I realize I better get moving.

Life is going to be interesting with Alex Maxwell around. But maybe that’s exactly what I need. 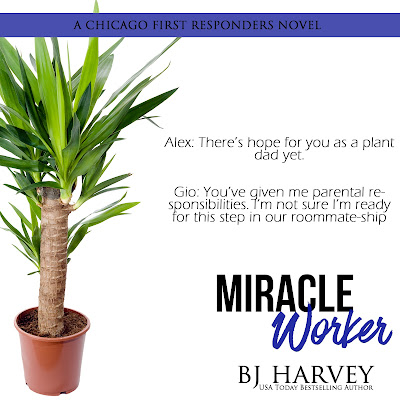 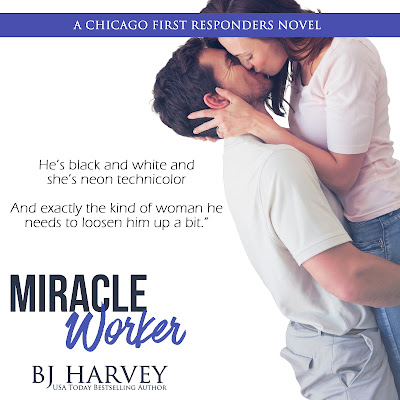 💙Review💙
Gio is a man who need order and routine both when it comes to his career as a police officer and his personal life. When he needs a roommate, his brother suggests that Alex, a recent addition to the firehouse, needs a place to stay it seems like the solution to both their problems however he wasn’t prepared for the fiery whirlwind who came crashing into his life.
Firefighting is in Alex’s blood, but she is determined to forge her own path. As she and Gio spend time together there was no denying the physical connection between them, but it was the emotional connection they developed that made their relationship so special.
Gio and Alex couldn’t be more different when it comes to their personalities or lifestyles, but they find the perfect balance in each other. 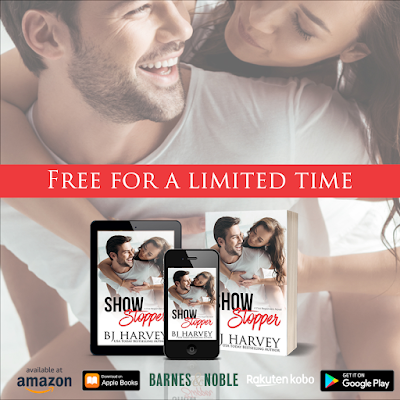 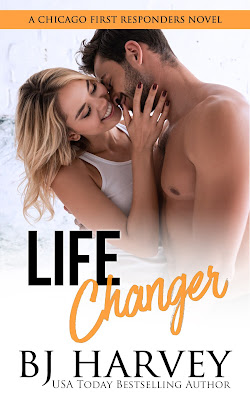 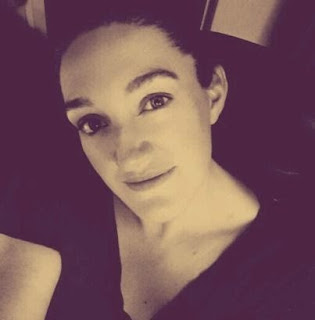 BJ Harvey is the USA Today Bestselling Author of angsty contemporary romance, romantic comedy, and sometimes a little bit of romance suspense. She regards herself as a smut peddler, suspense conjurer, and a funny romance thinker upper. An avid music fan, you will always find her singing some hit song badly and loving every minute of it. She’s a miner’s wife, a mom to two beautiful teenagers, and was born in New Zealand and currently lives in Perth, Australia. 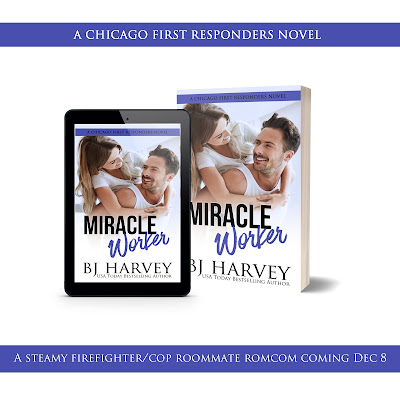