Not Happening Again releasing January 24
From USA Today bestselling author A. M. Madden comes a love-versus-lust, unplanned-relationship, stand-alone novel about a romance author who learns that “commitment free” can be anything but. 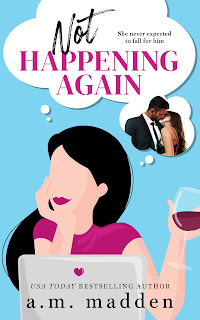 Some think that every romance author leads a hearts-and-rainbows existence.

But in my case, they’re wrong.
Sure, I’ve had my share of relationships . . . and heartbreak. But who needs the hassle? I prefer to leave love and emotions for my books, because that way I won’t get hurt. And my beliefs provide a stress-free and fun personal life.
So, when a chance encounter with my best friend’s brother-in-law puts me on his radar, and we end up at his place, logic smacks me hard. He is the “love ’em and leave ’em” type. But I’m the one who runs—and I’m the one who claims it won’t happen again.
Until encounter number two occurs. Hey, a woman has needs too.
To say he’s hot would be an understatement. But with his looks comes a level of cockiness usually found only between the pages of steamy novels. And just like a character in my fictional tales, the ever-confident walking orgasm makes me an offer I can’t refuse.
I decide to indulge in Nate Navarro provided I do so in moderation, on my terms, with a modicum of control. He’s my chance to get lost in lust, and you better believe I jump on it.
Who cares that he’s known as a serial bachelor who shuns the notion of love? I don’t. Nor do I get hung up on the fact that the very successful divorce lawyer contradicts my own hearts-and-rainbows profession. It’s just sex. Besides, being with him fits my own agenda perfectly, since he wants a passionate, no-strings-attached arrangement.
Until it becomes more than just sex, more than just an arrangement . . . for me at least.
For him, nothing has changed.
I am such an idiot.
Not Happening Again is book 2 in the stand-alone series, Navarro Triplets.
Grab Your Copy Here:
Amazon | Apple | Nook | Kobo 💙Review💙
Amy is a romance author whose past has shown her that love is for other people and not for her. So what’s the harm in acting on the chemistry between her and Nate as it’s only one night but what happens if one night is not enough?
Nate is a divorce lawyer who has seen what happens when love goes wrong. He prefers to keep his relationships casual and short but there is something about Amy that keeps him coming back. Let the fun begin!
Humor and romance combine as two people who are single and determined to stay that way find that their hearts know so much more than their heads.
Not A Chance in Hell releasing February 21
From USA Today bestselling author A. M. Madden comes a strangers-to-lovers stand-alone novel about a woman whose father leaves her a building in New York—along with an impossible-to-resist co-owner. 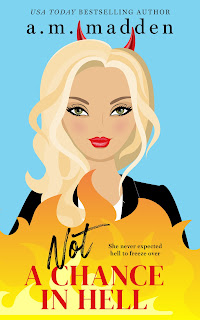 Do you know that feeling when life is moving along without incident, but in your gut you sense something is coming? Yeah… me too.

That something turned out to be property I inherited from my estranged father. One small problem: my father lived in New York City, while I live in California. Oh, another thing… my dad thought it’d be a good idea to split the building he owned in SoHo between me and his tenant, the undeniably maddening Brad Navarro.
An interesting thing about Brad, though—he is an identical triplet. Yes, there are three of these gorgeous specimens walking the earth. Another fun fact—he owns a successful bar on the ground floor of the address we now share, as well as the entire first floor… but I own floors two, three, and four. Nice and complicated, right?
I simply can’t be tied to this man. Besides the fact I happen to love my life in California, I want no connection to the cocky, arrogant, ridiculously gorgeous, sexy-as-sin, thinks he’s God’s gift to women, walking orgasm who can rock my world with that damn smirk—
Um, I digress. Anyway, I just can’t.
Of course I suggested that we sell, which earned me the nickname She-Devil, and I believe his exact words were “not a chance in hell.”
So now I need to figure out a way to make hell freeze over. My chances of that happening are slim. Plan B would be to simply ignore him, go back to my life, and pretend he hadn’t crashed into it.
But try telling that to my libido, because ignoring Brad Navarro is easier said than done.
Not a Chance in Hell is book 3 in the stand-alone novel series, Navarro Triplets.
Pre-Order Your Copy Here:
Amazon | Apple | Nook | Kobo 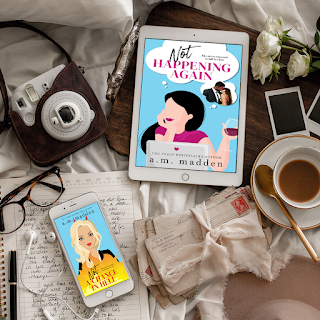 A USA Today bestselling, award-winning author, A.M. Madden is also a Jersey girl whose addiction to romance started at twelve after reading Judy Blume’s Forever. As a self-proclaimed hopeless romantic, she truly believes that true love knows no bounds. In her books, she aspires to write fun, sexy, realistic love stories that will stay with you long after you turn the last page. She creates realistic characters and believes there’s no better compliment than when readers felt they knew the characters personally.

When not writing, she’s busy being a wife to her soulmate, and a mother to two boys who she believes are the most handsome men on earth. She loves to cook, hates to bake, and dreams about living at the beach someday.
A. M. Madden is the author of the popular Back-Up series, as well as several other contemporary romances. She is also a published author with Loveswept/Random House and Entangled Publishing.
Her debut novel was Back-Up, the first in the Back-Up series. In Back-Up, A.M.’s main character, Jack Lair, caused readers to swoon. They call themselves #LairLovers and have been faithful supporters to Jack, as well as to the rest of his band, Devil’s Lair.
Connect with A.M. Madden
Sign up for A.M. Madden’s Newsletter at www.ammadden.com
Facebook | Instagram | Twitter | BookBub | Goodreads | Reader Group | YouTube
Hosted By: