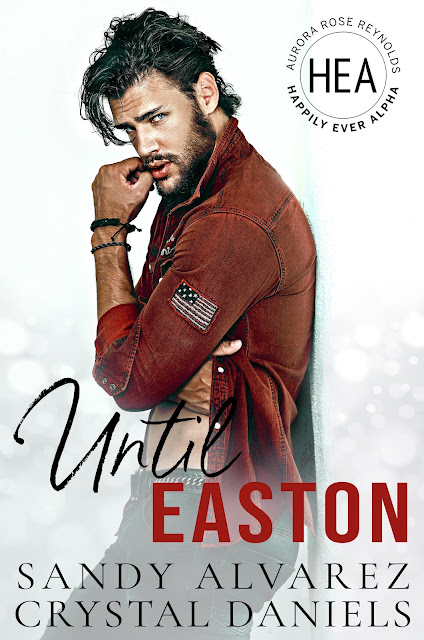 Title: Until Easton
A Happily Ever Alpha World Novel
Authors: Sandy Alvarez & Crystal Daniels
Publisher: Boom Factory Publishing, LLC
Genre: Contemporary Romance
Release Date: January 28, 2022
BLURB
Front man for East of Addiction.
A rock God.
Easton Evans has everything he ever wanted. To be a part of a world-famous rock band, fame, money, and his choice in women.
They’ve been on the road touring for nearly a year, and by all appearances, Easton has a perfect life, but something is missing. He just doesn’t know what that is yet.
Like a falling star, Easton is burning out—running on fumes. Not to mention a fan’s undying infatuation with him is reaching stalker level. He needs a vacation before the road snuffs out his creative flames for good.
A small town in Tennessee looks like the perfect place to lie low and find peace.
Until he steps foot on Connelly Ranch and meets Becca, a spitfire redhead.
Becca is barely keeping her head above water. She’s stretching herself thin, doing everything she can to keep the bank from taking her family’s legacy.
She’s convinced Easton is nothing more than a heartbreaker, your stereotypical playboy who is used to getting what he wants.
Easton is determined to prove her wrong.
Until Easton is part of Aurora Rose Reynolds’s Happily Ever Alpha World. If you loved Until Jax, then you will want to read Until Easton.
ADD TO GOODREADS 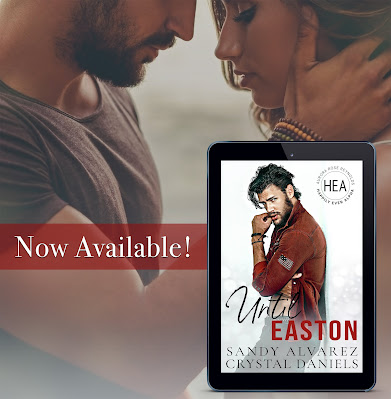 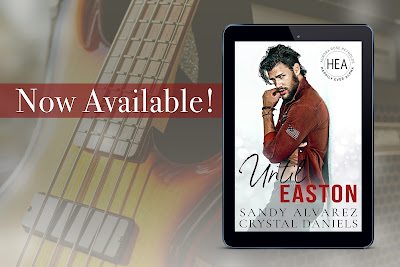 🎤Review🎤
Easton is a successful musician who appears to be leading a charmed life however he has attracted the attention of the wrong person and the actions are escalating. He has been advised that the best course of action is to temporarily remove himself from the situation which is how he finds himself on a ranch in Tennessee.
Beca is focused on being there for her family and ensuring that their ranch remains viable so she can’t afford to be distracted by a sexy man who is only looking for a good time and will be on his way. She is about to find out that she couldn’t be more wrong when it comes to Easton.
Easton is attracted to Beca but it is the emotional connection he feels for her that makes him determined to show her that he wants a lifetime with her but that also means dealing with the danger in the present.
AUTHORS’ BIO
Crystal and Sandy are Indie Authors and the sister writing duo behind the widely popular Kings of Retribution MC Series – Undaunted, The Darkest of Light, Finding Solace, Defy, Unbreakable, Lost King, and Prospect. Also, Kings of Retribution MC-Louisiana Chapter: Riggs, Wick, Nova and Kiwi. Sharing the same passion for books and storytelling lead them on an exciting journey to not only read all the incredible stories they have loved so much over the years, but to write some of their own.
Since 2017 the duo have written and published eighteen books. Other works include Leather and Mistletoe (standalone), Love above Law, Demetri -The Volkov Empire, Nikolai – The Volkov Empire, Keeping Denver, Bayou Christmas, and Whiskey Holiday
AUTHOR LINKS
FACEBOOK
INSTAGRAM
TWITTER
WEBSITE 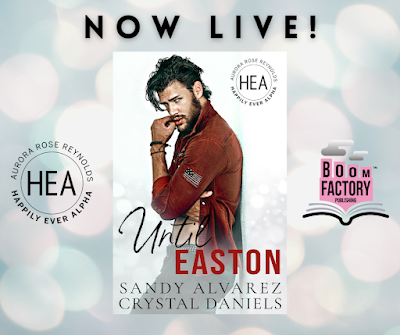