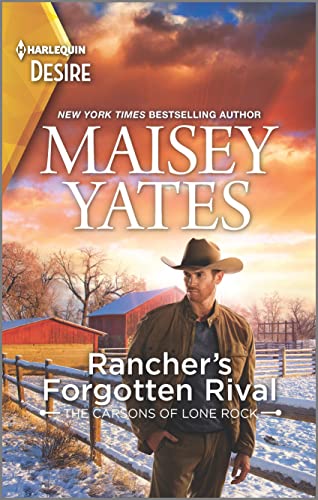 Will amnesia turn these enemies into lovers? Find out in the first Carsons of Lone Rock novel by New York Times bestselling author Maisey Yates.

Chance Carson is the one man in Lone Rock who gets Juniper Sohappy all riled up. His family is ranching royalty. He’s arrogant, insufferable and obnoxiously charming—she’ll keep her distance, thanks. But when Juniper finds him on her property, injured and without his memory, she saves his life…and sort of lets him believe he’s her ranch hand. Making the entitled rancher work a little is one thing…but actually liking the man is another. Falling for him? No way. And yet the passion between them is as undeniable as it is unexpected. Will it survive the truth?

From Harlequin Desire: A luxurious world of bold encounters and sizzling chemistry.

Love triumphs in this uplifting romance, part of The Carsons of Lone Rock series:

Juniper is trying to balance her career as an EMT and managing the family’s ranch. Her family has been involved in a bitter dispute with their neighbors due to water rights that they claim were taken by less than honorable methods. When she comes across an injured man, she realizes it is her nemesis Chase and since she realizes he has amnesia she decides to nurse him back to health without anyone knowing.

Chase has been told by Juniper that she works for him, so he has been helping her out while he heals. When he regains his memory, he decides that turnabout is fair play but as they spend time together the sparks fly but can they find a way to bridge the distance between the two families?

Chase and Juniper take us on a heartwarming journey as Chase’s amnesia allowed them to get to know each other without the turmoil of their past history and realize that they make much better lovers than enemies.

New York Times and USA Today Bestselling author Maisey Yates lives in rural Oregon with her three children and her husband, whose chiseled jaw and arresting features continue to make her swoon. She feels the epic trek she takes several times a day from her office to her coffee maker is a true example of her pioneer spirit.

In 2009, at the age of twenty-three Maisey sold her first book. Since then it’s been a whirlwind of sexy alpha males and happily ever afters, and she wouldn’t have it any other way. Maisey divides her writing time between dark, passionate category romances set just about everywhere on earth and light sexy contemporary romances set practically in her back yard. She believes that she clearly has the best job in the world.