Alaska Dreams by Jennifer Snow is out now! Check out this gorgeous romance and grab your copy today! 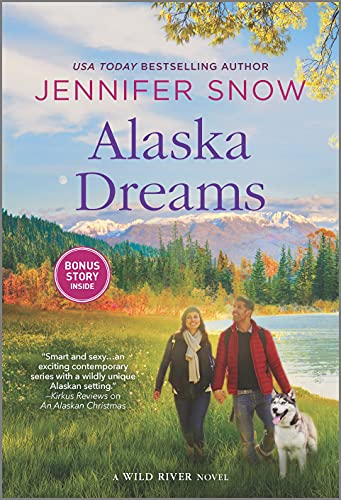 Is she making the right decision…for her career and her heart?

Following a near-death experience, Selena Hudson is finally going after the career she wants. And since casting directors won’t see her as anything but a rom-com queen, Selena signs on to produce and star in her own movie—an edgy psychological thriller. But just as the cast and crew arrive on location in Wild River, Alaska, the leading man drops out of the production.

Reporter Gus Orosco is not hiding out in Wild River—he’s waiting for the dust to settle after his on-camera “overreaction” triggered by watching his ex-fiancee get engaged to a superstar hockey player. Gus doesn’t want to be anywhere near the film crew shooting at his family’s campgrounds, but Selena makes him an offer he can’t refuse: she’ll snag Gus an interview with Sports Beat if he’ll be her leading man. All Gus has to do is learn his lines, hit his marks and somehow ignore the sparks flying between them…even though they’re hot enough to melt the Alaskan snow.

Get Your Copy Today:

Selena is an actress who has grown weary of being pigeonholed into the roles she has had in the past rather than the roles she would like. She has come to the conclusion that the only way to achieve her dream is to take part in a small production that is being filmed in Alaska however she hits a roadblock when her boyfriend and leading man decides not to participate.

After his personal and professional life took in a detour in the most public way possible Gus has returned to Wild River to put some time and space between himself and the situation. Having the movie being filmed on the family lands was difficult enough but when she offers an arrangement that will help both their careers the fun really begins.

Even though Selena and Gus paths wouldn’t have crossed under normal circumstances once they started to get to know each other they proved they were perfect for each other in every way.

Jennifer Snow is a USA Today Bestselling Author writing contemporary romance fiction for Grand Central Publishing, Entangled and Harlequin. Her stories range in heat level from sweet to sexy and are set everywhere from big cities to small towns. Her books are light and humorous, but also full of heart, featuring families and communities readers love to visit over and over again.

Originally from Newfoundland, Canada, she now resides in Spain with her husband, son and three mischievous cats.

She currently publishes psychological thrillers under her pen name J.M. Winchester and writes screenplays and TV shows in her ‘spare’ time. Her holiday rom-com, Mistletoe and Molly airs Christmas 2021!

More information can be found on her website at http://www.jennifersnowauthor.com