Boston Hawks owner Scott Reland is my father’s biggest rival and the last man who should catch my eye. But when he does, I don’t look away.

We’ve circled each other for years, two outliers in a small club of NHL owners. We know the rules, manage similar pressures, and understand that this lifestyle — hockey over everything — isn’t for everyone.

Which is why I want out.

To prove to my father that I have a future beyond the New York Sharks, I score one for me and open a bakery in Boston, the city that reveres Scott.

It isn’t long until the dynamic and perceptive Hawk pursues me. And I’m entirely unprepared to be swept off my feet, cared for and supported after so many years on my own. Scott easily draws me back into the hockey life I thought I didn’t want.

But can our relationship survive the demands of this industry? Or will I always be keeping score, second to the game that dictates everything? 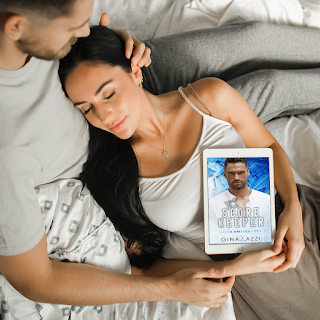 🏒Review🏒
Although her father is the owner of the New York hockey team that wasn’t the life Noelle wanted. Instead, she has tried to forge her own path away from hockey and has opened one bakery and is now expanding to Boston which brings Scott back into her life.
Scott met Noelle through her father as he owns the Boston Hawks and now that she is in Boston, he wants to pursue what they could have together. She has finally managed to distance herself from hockey, so she isn’t sure she wants to re-enter that world despite the chemistry and connection between them.
I really enjoyed Scott and Noelle together as he supported her dreams and didn’t try to mold her into someone else as they realized that they could have the life and love they always wanted with each other.

I’m Gina Azzi, a book-obsessed, coffee-drinking, globetrotting, mama of soon-to-be three! I write sweet with a dash of spicy New Adult and Contemporary Romance full of good men putting in work to win the hearts of even better women.

A total Jersey girl at heart, I struggle with insatiable wanderlust and currently reside in Ontario, Canada with my family.

When I’m not dreaming up storylines or writing all the words, you can find me hanging with my littles, attempting to bake, or planning my next adventure.

Connect with me on social media or at ginaazziauthor@gmail.com. I’d love to hear from you!