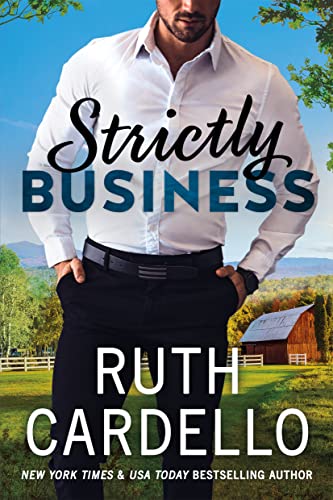 Lies and attraction abound when a savvy businessman posing as his twin and an oil baron’s niece battle over a family farm in this steamy romance from New York Times bestselling author Ruth Cardello.

I just found out I have an identical twin. Wasn’t looking for one. Would have preferred to not have one, but here we are. We have nothing in common. I was adopted by a successful businessman who raised me to see life as a game and gave me the skills to win it. Him? He is about to lose his family’s farm. You heard me—farm.

Lucky for him, I’m a firm believer that when it comes to family, no one goes to battle alone. I’m in. I’ve switched lives with him and will use every business trick I know to save his farm.

However, my initial plan did not take into account a drop-dead gorgeous oil rep or the secrets I uncover about my brother. And worst of all, I’m starting to like the farm and all its inhabitants. I can’t stop thinking about that oil rep. This will definitely take longer to resolve than anticipated.

Grab Your Copy Here:
Amazon US

Jesse was separated from his twin brother Sam at birth and the completely different lives they have led have always led to very different personalities. While Jesse is focused on being a successful businessman who has little time for anything else Sam has put all his efforts into keeping his farm viable and will do anything for anyone. When his farm is being threatened Jesse pretends to be him so that he can ensure Sam can keep his farm and then they will both go back to their regular lives.

Crystal doesn’t have a lot of family, but her uncle has always been there for her so when he requests that she approach a farm owner and convince him to sell she can’t say no. What she hadn’t expected was to be attracted to the man or the secrets that stand between them.

This is a story about love and family that includes humorous interactions, a few surprises and two characters who draw you in.

Ruth Cardello hit the New York Times and USA Today Bestsellers Lists for the first time back in 2012.


Millions of sales are evidence that her books are akin to potato chips, addictive from the first one. She has created a multi-series billionaire world with a combination of escapism and realism that has gained her a faithful following of readers.

Ruth Cardello was born the youngest of 11 children in a small city in northern Rhode Island. She spent her young adult years moving as far away as she could from her large extended family. She lived in Boston, Paris, Orlando, New York–then came full circle and moved back to New England. She now happily lives one town over from the one she was born in. For her, family trumped the warmer weather and international scene.

She was an educator for 20 years, the last 11 as a kindergarten teacher. When her school district began cutting jobs, Ruth turned a serious eye toward her second love- writing and has never been happier.