From Book 1: Heart of Stone

Bound by need. Entwined in secrets…

I had dreams and aspirations, none of which included a man by my side. Been there, done that. Then I forgot my cellphone, and all of my carefully laid plans went to hell.

I saw the dark promises in his eyes when he looked at me. But the shadows of my past haunted me, making me afraid to explore the possibilities I could never before have imagined.

I was used to getting what I wanted. I understood the value of finesse and patience to achieve the desired result. But a chance run-in with Krystina Cole quickly turned my world upside down.

She was strong, determined, devastatingly beautiful—and stubborn as hell. Her quick wit and firecracker attitude was the complete opposite of what I wanted in a woman. But I still wanted to claim her. Tame her. Make her mine.

And I always get what I want. 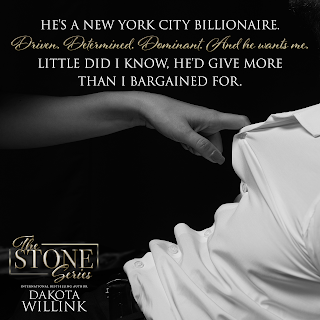 Heart of Stone is the first book in Krystina & Alexander’s epic love story. It’s the beginning of the steamy and unforgettable series by Amazon Top 100 Bestselling Author Dakota Willink. 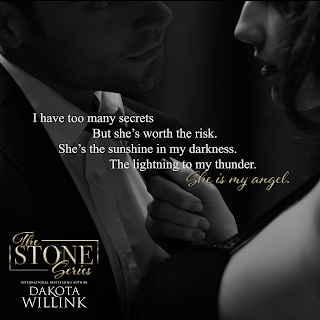 Dakota Willink is an Award-Winning and International Bestselling Author. She loves writing about damaged heroes who fall in love with sassy and independent females. Her books are character-driven, emotional, and sexy, yet written with a flare that keeps them real. With a wide range of published books, a magazine publication, and the Leave Me Breathless World under her belt, Dakota’s imagination is constantly spinning new ideas.

The Stone Series is Dakota’s first published book series. It has been recognized for various awards, including the Readers’ Favorite 2017 Gold Medal in Romance, and has since been translated into multiple languages internationally. The Fade Into You series (formally known as the Cadence duet) was a finalist in the HEAR Now Festival Independent Audiobook Awards. In addition, Dakota has written under the alternate pen name, Marie Christy. Under this name, she has written and published a children’s book for charity titled, And I Smile. Also writing as Marie Christy, she was a contributor to the Blunder Woman Productions project, Nevertheless We Persisted: Me Too, a 2019 Audie Award Finalist and Earphones Awards Winner. This project inspired Dakota to write The Sound of Silence, a dark romantic suspense novel that tackles the realities of domestic abuse.

Dakota often says she survived her first publishing with coffee and wine. She’s an unabashed Star Wars fanatic and still dreams of one day getting her letter from Hogwarts. She enjoys traveling and spending time with her husband, her two witty kids, and her spoiled rotten cavaliers. During the summer months, she can often be found taking pictures of random things or soaking up the sun on the Great Lakes with her family. 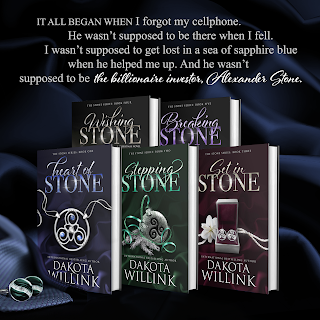