Release Date: July 28
The ABCs have never been sexier… A secret baby, second-chance, contemporary stand-alone romance“Representing the most perfect example of quality or class” ~ QuintessentialA trip back to the small Indiana town of Riverbend to finalize my grandmother’s last will and testament throws my world off its axis. I wasn’t prepared to learn the stipulations of her will or that she’d left her beloved mercantile Quintessential Treasures to my college summertime love, Kandace Sheers.Imagine my greater surprise when I learn about the secret that’s been roaming Riverbend for the last five years. Here are a couple of hints:She’s five years old.She has her mother’s silky auburn hair and my golden eyes.The answer is simple.I take responsibility for the girl and go back to Chicago where my life awaits.It turns out, Grandma had other plans because life’s never that simple.Have you been Aleatha’d?Enjoy this sweet, funny, and sexy, secret-baby, second-chance, contemporary stand-alone romance that brings back the feelings of what it’s like to be young and in love. A stand-alone in the ABCs of Love and one of Aleatha Romig’s ‘Lighter Ones,’ QUINTESSENTIALLY – the ONE.
Grab Your Copy Here! 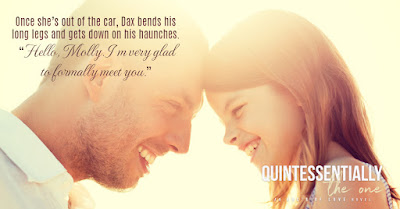 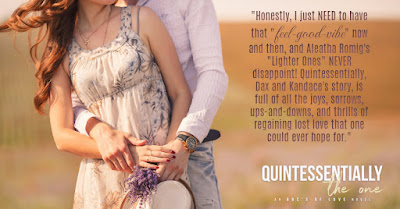 🍂Review🍂
Dax remembers the wonderful times he spent in Riverbend with his grandparents and his first love Kandace. Despite the feelings he had for her he wasn’t destined to stay, and she wasn’t destined to leave so they haven’t seen each other for years. Upon the death of his grandmother, he has returned to finalize her estate, but he is about to realize that the last time he left town he left much more than his grandparents behind.
When Dax walked out of Kandace’s life, she was left with much more than memories. She is content with being a single mother to her daughter Molly and is now managing the store that Dax’s grandmother left her. She loves her life in Riverview and can’t imagine anything different until Dax comes to town and both their lives will forever be changed.
This is a heartwarming story about love and life that is filled with humor and romance as they need to choose what is best for the three hearts that it will affect. 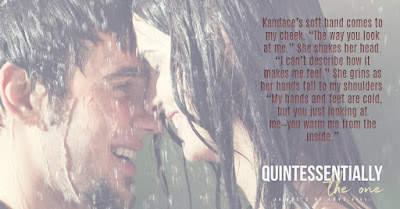