Vanessa Jared’s Got A Man 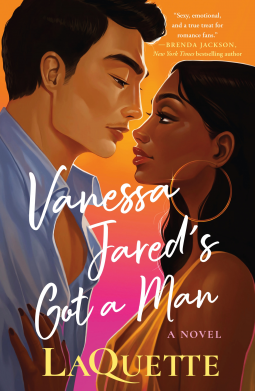 LaQuette’s debut sexy romantic comedy Vanessa Jared’s Got a Man tells the story of a woman getting her groove back and getting a second chance at love.

Vanessa Jared, a 40-something divorcee, decided that the best way to pull herself out of their post-divorce slump was to form The Savvy, Sexy, Singles Club and start the “Do Me” portion of her and her friends’ lives.

But on the two year anniversary, a sexy sheriff shows up on Vanessa’s doorstep wanting her to help him keep his little sister from marrying her no-good ex. Vanessa is not down for this at all. She wants nothing to do with her ex…until she spots a photo of her ex’s new fiancee wearing her grandmother’s ring–which he clearly stole from her. So now it’s on. Vanessa is ready to take this trifling (fill-in-the-blank) down. What she does not expect is to fall in love along the way.

After being married for two decades to a man who didn’t respect her or treat her well Vanessa is now divorced and determined to live her life on her terms. As part of her journey, she decides to join a divorce group where she finds an incredible friendship with two other woman who can relate to her experience. All she wants to do is leave her ex in the past until Michael shows up at her door wanting her help to ensure his sister doesn’t follow in her footsteps.

Michael is a Sheriff who is determined to protect his sister from what he believes is a big mistake. He has a bad feeling about her fiancé and believes that the best way to uncover the truth is by meeting the woman who has firsthand experience. All he expected was for her to talk to his sister about the man she was marrying, and he certainly never expected to develop feelings for her.

Neither Vanessa nor Michael are looking for a relationship although their reasons are very different. The interactions between them are humorous, the romance is steamy, Vanessa and Michael are relatable characters and there is a great cast of second characters that add to the story.