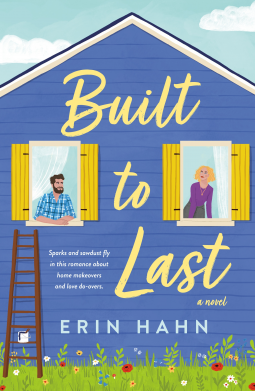 “I loved this delightful romance about makeovers of old homes, old personas, and relationships that never had a chance to launch. A sweet, charming reminder of what you can build with a strong foundation.” – Jodi Picoult, #1 New York Times bestselling author of The Book of Two Ways

Erin Hahn’s Built to Last is a sparkling second chance romance about owning what you’re worth and fighting for the one who got away.

Shelby Springfield has spent the last ten years trying to overcome her past, sanding it away like the rough spots on the vintage furniture she makes over. But as a former child star, it’s hard to forget a widely documented meltdown and huge public break up with her former co-star Lyle Jessup. It’s also hard to forget her other co-star and childhood sweetheart, Cameron Riggs—the one who got away.

Anytime Shelby has called, Cameron has come running… And then he runs right off again to chase stories around the world by making documentaries, too scared to admit what he really wants. But when Lyle stirs the pot, getting the two back in the spotlight with a home renovation show, Cameron can’t help but get on board.

There’s something in it for everyone—almost. Cameron wants to set down some roots. Shelby wants to prove she’s not the messy party girl anymore. And a jealous Lyle can’t help but try to get in the way. But for his two childhood friends who had more chemistry than he could ever dream of, nothing is getting in the way of their second chance at love.

“Thank you, Erin Hahn, for making me laugh and swoon and cry sweet, happy tears. Can I live in this book?” – Jen Doll, author of Save the Date and Unclaimed Baggage

Shelby was a child star who earned quite the reputation however it wasn’t the way that anyone would want and a large part of it was through no fault of her own but the actions of Lyle, her co-star who was also her boyfriend. She has created a new life for herself and is renovating houses with her father until she is offered a new opportunity not only with her ex but with Cameron, the man who has always owned her heart.

Cameron has always had feelings for Shelby, but it never seemed to be their time between his career as a photographer and her relationship with Lyle and the aftermath. Although he would rather not work with Lyle working with Shelby might just allow them to make amends for the mistakes of the past.

It soon becomes apparent that the chemistry and connection between Shelby and Cameron hasn’t waned over time. Despite the obstacles that they created as well as those from outside forces there is no denying that the only place they belong is with each other.