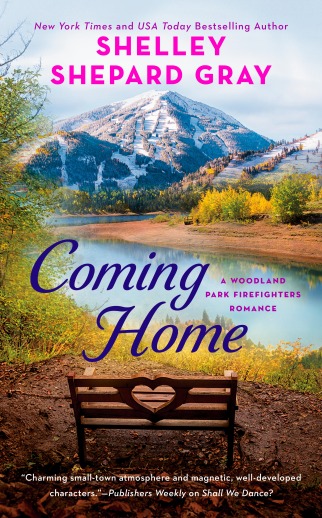 In Woodland Park, a small town nestled in the foothills of Pikes Peak, Anderson Kelly and Chelsea Davis were once the high school “it” couple—the star quarterback & prom king and the valedictorian & cheerleader. They broke up when Anderson joined the army and one poor decision at a fraternity party changed Chelsea’s life. Now, she works long shifts in a senior center to support her eight-year-old son, Jack.

After multiple tours in Afghanistan, Anderson has changed, too—he is physically scarred but mentally strong and eager to remain of service, he decides to move back to Woodland Park and become a firefighter.

Anderson and Chelsea steer clear of each other to avoid reopening old wounds, until they are forced to reconnect through the senior center and the embers of their love start to flare once more.

When Chelsea and Jack are involved in a dangerous collision on Ute Pass, Anderson realizes that he’s ready to risk everything—even his heart—for one more chance with Chelsea.

Grab Your Copy Here:
Amazon US

Chelsea was devastated when her high school sweetheart ended their relationship before he left to serve his country. She left town to attend college and returned a single home a single mother to her son Jack and is content with the life and career she has built until her first and only love returns to town.

Anderson believed he was doing the right thing by ending his relationship with Chelsea before he left but now that he has returned he isn’t so sure. The chemistry and connection hasn’t diminished over time but neither of them are the same teenagers who fell in love so will this be their second chance or are they destined for heartbreak once again?

This is an enchanting story about love, family and healing from the past. Due to their pasts, both together and apart, they are both cautious, but some things are meant to be even if at times it is a difficult and emotional journey to get there.

Shelley Shepard Gray is a New York Times and USA Today bestselling author, a finalist for the American Christian Fiction Writers prestigious Carol Award, and a two-time HOLT Medallion winner. She lives in southern Ohio, where she writes full-time, bakes too much, and can often be found walking her dachshunds on her town’s bike trail.