Misadventures with a TIME TRAVELER
by

Workaholic Allie Fine isn’t thrilled about a surprise birthday trip to the French countryside, where there’s nothing to do but drink wine and tour old castles. But boredom takes a hike when a sexy period actor shows up to be her special between-the-sheets gift.

Maximillian De Leon, the towering god with eyes of gold and pecs of steel, is the most incredible lover she’s ever had. But Allie wakes with confusion when her French lover tells her he’s actually Prince Maximillian, and he hasn’t seen the light of day since 1789.

Crazy or not, Max De Leon is the hottest man Allie’s ever met—and the perfect piece on her arm to impress the corporate brass and take her career to the next level. So what if he keeps claiming he has to marry her to break a centuries-old curse in order to stay alive. He’ll get over that soon enough…right?

*****
Misadventures is a romantic series of spicy standalone novels, each written or co-written by some of the best names in romance. The stories are scandalous, refreshing, and, of course, incredibly sexy. They’re the perfect bedside read, a ‘quick blush’ for the reader who loves a page-turning romance. 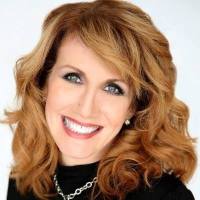 USA Today bestselling romance author Angel Payne has written for four publishing houses, and is also independently published. She loves to focus on high heat romance starring memorable alpha men and the women who love them.
She has numerous book series to her credit, including the Suited for Sin series, the Cimarron Saga, the Temptation Court series, the Secrets of Stone series (with Victoria Blue), the Lords of Sin historicals, and the rebranded Honor Bound series, as well as several stand-alone titles.
Currently, she is serving as the Vice President of Romance Writers of America’s Passionate Ink Chapter.
She lives in Southern California with her soul-mate husband and beautiful daughter.
https://www.facebook.com/authorangelpayne/
https://twitter.com/AngelPayneWrtr
https://www.instagram.com/angelpaynewriter/
http://angelpayne.com/

Allie may have enjoyed success in her career but the same can’t be said when it comes to the men she chooses. When she finds herself on a vacation with her friends all she wants is for it to be over until she meets Max.

Max is on a journey of his own except it involves travelling through the centuries rather than a vacation. He knows that Allie is his soulmate but convincing her that rather than a fling they belong together forever becomes more of a challenge than expected.

So much emotion and so much heat as two people find a love that transcends beyond anything you can imagine.