From the New York Times bestselling author of Pucked and A Lie for a Lie, a new stand-alone romance about trading favors, battling wills, and winning love.

When I joined Seattle’s NHL expansion team, I thought it was the start of something great. But nothing ever goes the way you expect. Take my introduction to my new neighbor. She came rolling in on the hot mess express at midnight, making a racket while she tried to get into my team captain’s apartment. Did I mention that he’s married to a woman who definitely was not her?

Imagine my surprise when I end up with an injury that has me out of the game for weeks, and she’s the one to offer to help me. I should probably add that she’s not the captain’s mistress. She’s his sexy, pastel-haired younger sister.

So we come up with an arrangement: she rehabs me so that I can get back on the ice sooner, and she can add a professional athlete that isn’t her brother to her client list. Seems simple enough. As long as I can keep my hands to myself and my hormones in check.

“Say you were taking a woman to a formal work function. Would you get her flowers or something?” I’ve gone on my fair share of dates, had a few relationships, but I’ve never been one for hearts and flowers or any of that bull. I’m thinking I might need to do that with Stevie, though, since she’s been screwed over pretty hard.

“Is this a date or a favor for a friend?”

“I guess she thinks I’m doing her a favor.” At least that was the impression that I got when I offered to go with her.

“Is that actually what you’re doing?”

“Can you give me a little more to go on?”

“Her ex is going to be there and I don’t want her to go alone.”

“You don’t want her to go alone because you’re worried he’ll be a jerk or he’ll try to take advantage of her?”

“Sure, yeah, that’s part of the reason.”

“Instead of me dragging the information out of you, why don’t you lay it down for me?”

“Hold up, we’re back to Rook’s little sister?”

“Who else would I be talking about?”

“I thought you said there isn’t anything going on between you, and now you’re taking her to some kind of work function? That’s not a favor; that’s a date. Does Rook know?”

“It’s none of his damn business.”

“Well, he doesn’t have control over her or what she does, or what I do.” I’m agitated now. “She’s not going to that thing alone. I don’t trust that ex of hers, and I don’t want her to end up in a situation she doesn’t like.”

Kingston tips his head to the side. “Dang.”

“Well, yeah, I like her.” What’s not to like? She’s gorgeous, and she’s funny and feisty; her body is rockin’; and she’s fun to be around, super chill, and genuinely selfless.

I shrug, because what am I going to say? The answer to that is yes, I want to date her, but the timing needs to be right. “I don’t want the ex thinking he has another chance.“

“When’s this event you’re supposed to take her to?” King asks.

He frowns. “We get back at noon on Saturday.”

I hadn’t considered a delay. The only reason that would happen is if the weather isn’t good. “It doesn’t start until five. I should have plenty of time to get home and throw a suit on.”

Kingston nods and taps restlessly on the edge of the pool. “So would you call this your first date?”

“We hang out all the time.”

“Other than PT sessions, we watch hockey, eat pizza, stuff like that.”

“Have you ever bought her flowers before? Brought her any gifts?”

“I brought her over an aloe plant once. But, like I said, it hasn’t been like that.” I don’t get why he’s so hung up on the flowers.

“Again, please try not to take offense, but are you sure you haven’t inadvertently put yourself in the friend zone?”

“How do I know if I’m in the friend zone?” I haven’t had a lot of friends who are girls. Actually, I don’t think I’ve ever had a friend who’s a girl who isn’t related to me. And I only have two female cousins, whom I see a couple of times a year at family functions. They’re significantly younger than me, so mostly I avoid them.

It’s Kingston’s turn to blow out a long breath. “If you put your arm around her and she gets all snuggly but doesn’t try to take it any further, it could mean you’re in the friend zone.”

I don’t know what my expression must be, but the panic I feel inside quite possibly reaches my face. I feel like it should be obvious that I’m interested. A guy doesn’t spend endless hours with a gorgeous woman who combines weird pizza toppings for shits and giggles. But then again, I haven’t attempted to make a move on her since the almost-kiss. And any conversation I’ve tried to have with her about it has been shut down. In fact, she wants to pretend it didn’t happen. I hadn’t considered that this might be because she actually didn’t want it to happen at all. She seemed just as into it as I was. Or maybe I’ve been misreading the whole thing. “If I’m in the friend zone, how the hell do I get out?”

New York Times and USA Today bestselling author Helena Hunting lives on the outskirts of Toronto with her incredibly tolerant family and two moderately intolerant cats. Helena writes everything from contemporary romance with all the feels to romantic comedies that will have you laughing until you cry. 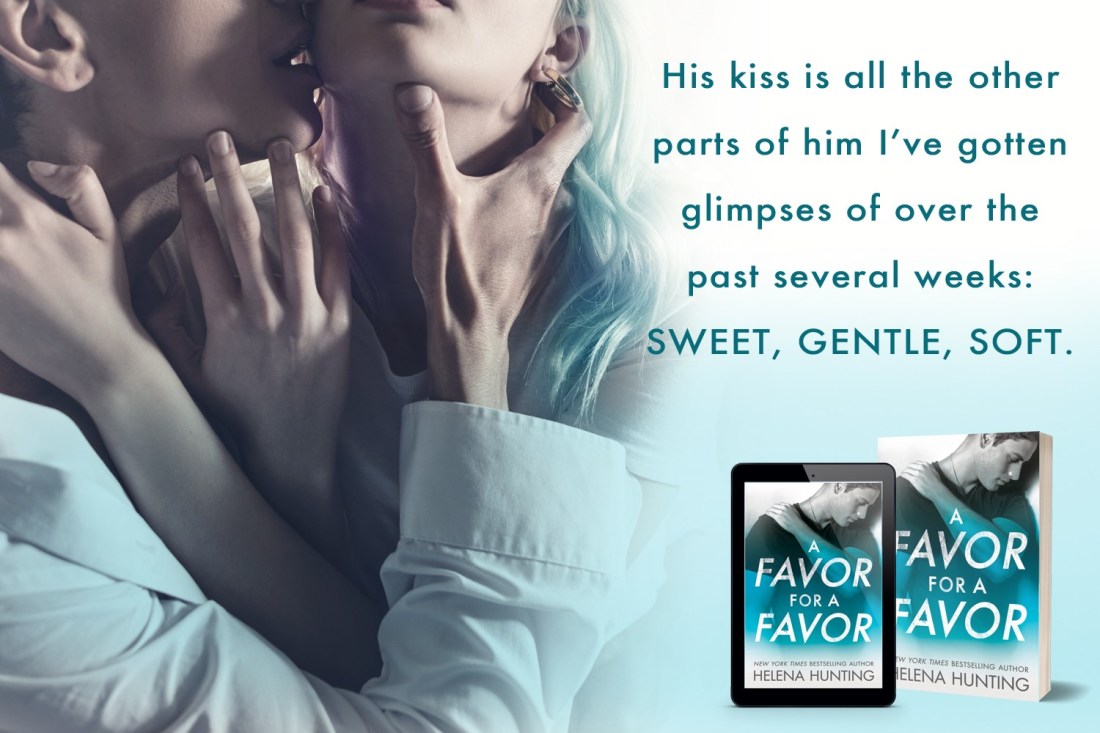 Stevie receives the birthday present that she didn’t want when she walks in on her boyfriend cheating on her but at least she knows her brother has her back. He has arranged for her to stay in his apartment while he is out of town but even that turns into a comedy of errors when she runs into his teammate Bishop.

Bishop is a professional hockey player who is irate to the extreme when a woman is making a ruckus in the hallway in the middle of the night. He has no idea why she is trying to get into his teammate’s apartment but the one thing he does know is she doesn’t belong there.

These two had no intention of seeing each other however when Bishop is injured he needs a physiotherapist, and Stevie is a physiotherapist who needs a client. It seems like the perfect solution to both their problems what could possibly go wrong?

What a fun story this turned out to be. Hot chemistry, humorous banter and all the feels as not only do we get to see the relationship between Stevie and Bishop unfold but we get to catch up with all the characters we know and love as well.