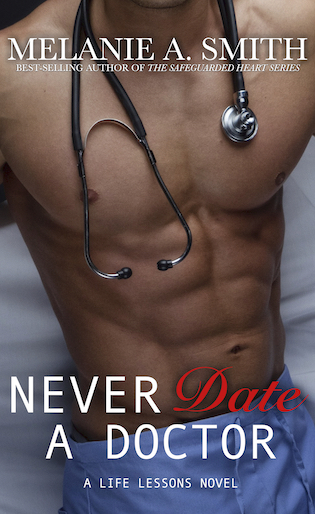 From best-selling author Melanie A. Smith comes the first book in a new series of steamy contemporary medical romance standalone novels about life lessons that break all the rules.

What’s the first rule of nurse’s club? That’s right: Never date a doctor. Which Sasha Suvorin has no intention of doing anyway, since she’s a nurse at Rutherford Hospital by day and working on her master’s degree by night. Who has time for dating, much less dating someone you work with? Bad idea much?

That is, until the sexy British Dr. Caleb Thompson starts at her hospital. It also doesn’t help that he’s exactly her type with his dark hair, blue eyes, and rockin’ bod. Or that he’s not your typical arrogant and bossy surgeon. But Sasha isn’t so easily convinced, and she soon discovers Dr. Hottie has a past that puts a stop to whatever she might have been feeling before anything ever starts between them.

Unfortunately, working together means facing temptation. Every. Single. Day. Is Sasha strong enough to resist what might just be the perfect man? And if she gives in, will Cal’s past stay in the past? Sasha may be used to playing it safe, but life has a way of teaching its lessons … one way or another.

Melanie A. Smith is the best-selling author of The Safeguarded Heart Series and other contemporary romance fiction. Originally from upstate New York, she spent most of her childhood in the San Francisco Bay Area before moving to Los Angeles for college. After that, she spent almost fifteen years in the Seattle Area, and now lives in the Dallas-Fort Worth area of Texas with her family.

A voracious reader and lifelong writer, Melanie’s writing began at a young age with short stories and poetry. Having completed a bachelor of science in electrical engineering at the University of California, Los Angeles, and a master’s in business administration at the University of Washington, her writing abilities were mainly utilized for technical documents as a lead engineer for the Boeing Company, where she worked for ten years.

After shifting careers to domestic engineering and property management in 2015, she eventually found a balance where she was able to return to writing fiction.

Melanie is also a Mensan and enjoys spending time with her family, cooking, and driving with the windows down and the stereo cranked up loud.

Between her career as a nurse and attending school Sasha doesn’t have the time or energy for love or a relationship or at least she didn’t until she met the sexy new doctor that she would be working with. A romance with a co-worker is hard enough but when he is a doctor and she is a nurse it could damage the career she has worked so hard to achieve but resisting is getting more difficult every day.

Caleb returns Sasha’s feelings and he believes that the reward of them being together is worth the risk but will their love be able to overcome the forces that are trying to drive them apart?

Cal is the perfect combination of sweet and sexy while Sasha’s strength and resilience shines through and there is no denying that they are meant to be.