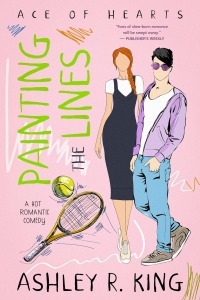 Title: Painting the Lines
Series: Ace of Hearts #1
Author: Ashley R. King
Publisher: City Owl Press
Genre: Romantic Comedy
Release Date: August 25, 2020
Blurb
Amalie Warner wants
another shot to prove that she can be a successful writer. After hitting the
bestseller’s list nine years ago, she’s lost her spark. Feeling pressure from
her father to leave her writing behind and to work for her family’s lucrative
hotel business, she’s desperate to find inspiration for her next big idea,
something that challenges and excites her, something real.

Enter Julian Smoke, a failed tennis player making a dream run for the US Open.
After a chance meeting at a bar, Amalie hates him instantly. He’s cocky and
arrogant, but Amalie knows his story could be her big break. Could he be more?

Everyone knows that in tennis, love means zero, but these two are about to
change that.

Perfect for fans of The Hating Game and Wimbledon.

“Fans of slow-burn romance will be swept away.”
-Publisher’s Weekly

Ashley R. King is a middle school English teacher whose love
of the written word began when her mom took her to the public library, letting
her check out stacks of books taller than she was. She’s the least athletic
person you’ll ever meet, but that doesn’t decrease her love for her favorite
sport, tennis.

She loves swoony romances and is addicted to sweet tea. When she’s not teaching
or writing happily ever afters, she can be found snuggled up with a book,
travelling, or quoting obscure lines from her favorite movies and tv shows. She
lives in a small town in Georgia with her favorite person in the world—her
husband, and their sweet and chatty spoiled cat, Cleo.

When Amalie began her career as a writer she thought that her first book was a sign of things to come but nearly a decade later she finds herself stagnated and in jeopardy of giving up her dream and returning to the life she didn’t want.

Julian has experienced success in the past as a tennis player, but he is well is struggling in the present. When fate brings them together, they decide to form an alliance, but will it end in love or war?

The interactions between them are both sarcastic and sexy which is combined with humor and romance as they realize that together they can make each other’s dreams a reality.