Title: Spying Under the Mistletoe
Series: Love Undercover #2
Author: Stina Lindenblatt
Genre: Romantic Comedy/Romantic Suspense
Release Date: September 24, 2020
BLURB
She’s a former mafia princess. He’s been hired to track down her family secret…
After escaping my life as a Russian mafia princess, I’ve got everything I could possibly want—other than a family.
So when the Christmas concert at the seniors’ residence where I volunteer is at risk of being canceled, I have a perfect solution. My kindergarten students can perform for them. Because who doesn’t love cute singing kids?
Well, it would be cute if I knew what the heck I was doing. On top of that, one of my grandfather’s enemies has a different future in mind for me, which is putting a major damper on the festivities.
Fortunately, Landon Reed, the sexy substitute teacher, might be the one person who can help me with both situations…
****
My mission? Pretend to be a kindergarten teacher and become Chloe’s boyfriend so my team can track down her mafia cousin, the new crime boss who’s gone into hiding.
Except, my time in the Navy SEALs didn’t prepare me enough for this. For one, the last thing Chloe wants is a boyfriend. And what the heck do I know about teaching kids and putting on Christmas concerts?
But when her grandfather’s enemy attempts to kidnap her, the truth becomes a tangled mess—taking my heart along with it.
Because if there’s one thing Chloe doesn’t want, it’s to fall down the rabbit hole of her past. And that’s exactly where we’re heading.
GOODREADS LINK
BOOKBUB LINK

EXCERPT
Chloe
“Do you know anything about organizing performances?” Hope swirls inside me like a chocolate-and-vanilla soft serve ice cream.
“Not exactly, but I’m willing to do whatever I can to help you.”
“And that includes the seduction of Tabitha?” I flash him what I hope are convincing puppy dog eyes, channeling the ones in Whiskey’s photo.
“I don’t seduce women I don’t want to be with.”
“Even if it’s for a great cause?”
“Not even for that.”
“How about a little harmless flirting? Just pour on that natural charm you have going for you. You don’t have to seduce her. Flatter her a little, and she’ll be more than happy to oblige your requests.”
From the corner of my eye, I catch Ava cringing.
“You look like you work out regularly,” Kiera says.
Landon nods. “That’s right.”
He’s wearing a button-up shirt, but it’s clear from the way it fits his body, he’s in great shape. His exposed muscular forearms confirm that, too.
“Then, I suggest you remove your shirt while talking to her.” Kiera waves her empty fork at him. “That’s bound to work. Just don’t be obvious about it—that way she won’t get the wrong idea.”
Ava covers her mouth with her hand as though she’s trying to hold back a laugh. The corners of her eyes crinkle, giving it away.
“Can’t you just ask her?” he says. “She might surprise you. Tell her exactly why you want to do the concert. How can she say no?”
“Do you not remember the part about why she hates me? It’s not like I can even apologize for what happened. I didn’t do anything to encourage him. I’ve never even met her ex-husband.”
“Okay, I’ll ask her, but I’m not seducing her, and I’m not removing my shirt.” He directs the last part to Kiera, and I grin. 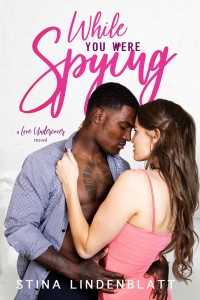 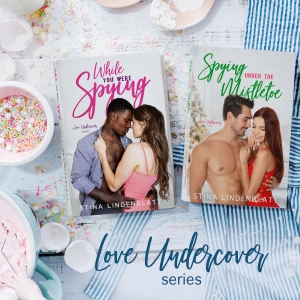 Born in
Brighton England, Stina Lindenblatt has lived in a number of countries,
including England, the US, Finland, and Canada. This would explain her mixed up
accent. She has a kinesiology degree and a MSc in sports biological sciences.
In addition to writing fiction, she loves photography, especially the close-up
variety, and currently lives in Calgary, Canada, with her husband and three
kids.
AUTHOR LINKS
WEBSITE
FACEBOOK
FACEBOOK GROUP
TWITTER
INSTAGRAM
PINTEREST
BOOKBUB

Chloe was born and raised in a lifestyle that she wanted no part of so at her first opportunity she left it behind. She has created a new life for herself where she works at a job she loves, is surrounded by a great group of friends and is always willing to keep others.

Landon career as a Navy SEAL has transitioned into working for a security company. His latest assignment is two-fold and that is to not only keep Chloe safe but to bring down her family as well. He thought pretending to be a teacher would be his biggest challenge, but he is about to find out that denying his feelings for Chloe may be even more difficult.

Humorous interactions, intrigue and not only are Chloe and Landon great characters but there is a great group of secondary characters as well.