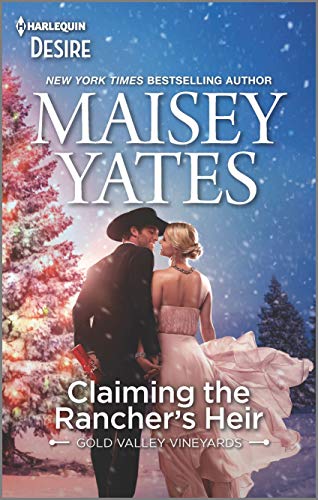 And the sexiest man she’s ever met.

Wren Maxfield hates Creed Cooper, but now she’s working with the wealthy rancher over the holidays! Those strong feelings hide undeniable chemistry…and one wild night results in pregnancy. Now Creed vows to claim his heir. That means proposing a marriage in name only. But as desire takes over, is that a deal they can keep?

Grab your copy of CLAIMING THE RANCHER’S HEIR here!

Wren had always looked up to her father and tried to show him that she was worthy when it came to their family’s winery business however his public disgrace has her reflecting both on her life and his. She has come up with a plan to help market the winery but that means working with Creed who may be her nemesis but there is no denying the chemistry between them.

Creed manages his family winery as well so even though he finds Wren infuriating his attraction to her is the one thing he can’t control. When their steamy encounters result in a pregnancy Creed is determined to not repeat the mistakes of the past of that means marrying Wren and being an active father in their child’s life.

The chemistry between Creed and Wren was never the problem but if they are to have a future together Creed must heal from his past and open his heart to the love and future they could have together.

New York Times and USA Today Bestselling author Maisey Yates lives in rural Oregon with her three children and her husband, whose chiseled jaw and arresting features continue to make her swoon. She feels the epic trek she takes several times a day from her office to her coffee maker is a true example of her pioneer spirit.

In 2009, at the age of twenty-three Maisey sold her first book. Since then it’s been a whirlwind of sexy alpha males and happily ever afters, and she wouldn’t have it any other way. Maisey divides her writing time between dark, passionate category romances set just about everywhere on earth and light sexy contemporary romances set practically in her back yard. She believes that she clearly has the best job in the world.