Didn’t Expect You by Claudia Burgoa is NOW IN AUDIO! 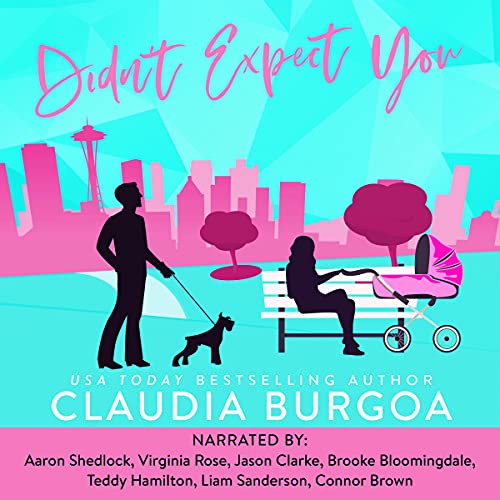 The right life is the one you never see coming.

I had it all. The luxury apartment, hot dates, and the big office to go with long nights at the office. Life was perfect.

But after a one-night stand, two little lines on a pregnancy test, and three lost legal cases later… Well, overnight I went from career lawyer to single mom.

It’s okay, I can do it. I’m ready to face this alone until….

He’s as hot as he is jaded. When it comes to relationships and family, he’d rather jump off a cliff. I wrote him off long ago, except since he learned about the baby he’s been by my side.

Is it pregnancy hormones, or is there something real happening between us?

I didn’t expect any of this…most of all him.

Didn’t Expect You is a billionaire romance of unexpected pregnancies, exciting encounters, and flirty love. It includes a very confused dog, a precious newborn, and a family you might want to belong to. This chick-lit novel is a romantic comedy with a HEA guaranteed!

Nyx has always been the one in her family that others go to whenever they need assistance or advice. She is focused on her career as a lawyer and has plans for what she wants her future to look like and it didn’t include getting pregnant by a man she never wants to see again. She is floundering as she adjusts to her new normal but the last person she expected to be her support system was Nate, the brother of the man her sister is marrying.

Nate is a man who has been focused on his career as well and isn’t looking for love or a relationship. He has always been attracted to Nyx so when he finds out about the baby she is carrying he is determined to be there to support her through all the ups and downs whether she wants it or not.

Nate and Nyx have a lot of similarities both when it comes to their careers, their families and their views on relationships. They both believed they knew the direction they wanted their future to take until they found what they didn’t know they were looking for in each other. Although the story is told primarily by two narrators the narrators for the secondary characters added a new dimension to the experience.