My One Regret from Claudia Burgoa is NOW IN AUDIO! 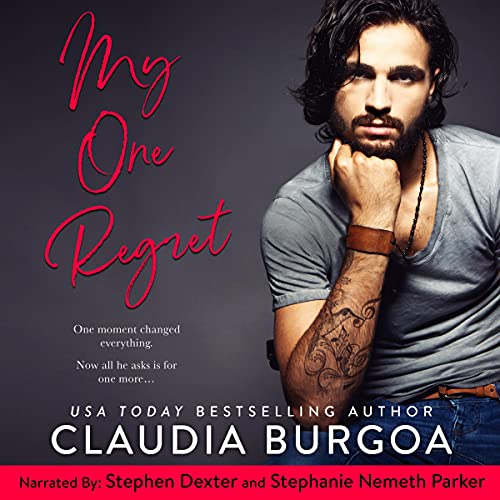 He was a rockstar. A legend. And a single father.

I should’ve stayed away. I just couldn’t resist him.

We were happy until he texted. We need to talk. The last famous words.

But I knew I needed to let him go. It was over. We were never meant to be together.

Just like everyone else, he left. I couldn’t handle touring with his rock band and a relationship.

Until I discovered Sadie. The love of my life. When I left her, I made the biggest mistake of my life. But when tragedy struck, my world came apart.

Kaden is a successful musician who is trying to balance his vindictive ex against the needs of his teenage daughters. When he meets Sadie, he feels an immediate chemistry and connection between them and is steadfast in his pursuit of her heart. They have been together for three years and although the transition hasn’t been without its challenges one traumatic night will destroy what they shared until Sadie’s accident forces him to face what he has done.

Sadie has never had the family she deserved but she loves Kaden’s daughters as her own and believe their engagement would bring them closer. She was devastated when Kaden ended their relationship so even though he was there after her accident she isn’t about to just let him or his daughters back into her life.

Love was never the problem between Kaden and Sadie but now that she is back in his life he isn’t about to walk away. They take us on an emotional ride as Kaden wants both her and his daughters in his life but that means not only learning about the secrets in the past but healing from them as well. I really enjoyed the performance of the narrators as they brought out all the angst of not only Kaden and Sadie but the secondary characters as well.