Defying Our Forever from Claudia Burgoa is NOW IN AUDIO! 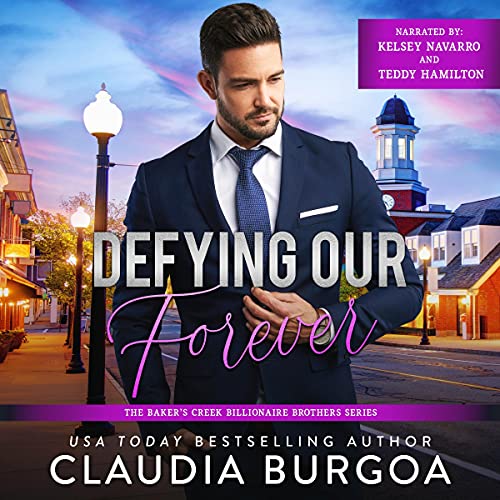 Fresh out of vet school, I married Pierce Aldridge. Gorgeous, sexy, and smart. He’s a philanthropist with a heart of gold, or so I thought.

But after a while he became distant, self-centered, and callous. The man I married disappeared before my eyes. I should leave him, but I can’t do it just yet.

There’s one thing I need, but I can’t have it if I divorce him. Just a few more months.

But my plans fall through when his father dies. The man was just as ruthless as his son.

Now, I can either spend 18 months with Pierce in his hometown playing the happy couple, or I could avoid the ordeal entirely if I sign the divorce papers. But I would lose the one thing I’ve been wanting my whole life.

The more time that passes, the more I realize that maybe I’ve been wrong.

Maybe the man I married is still there. The man I still love.

But is it too late?

The Baker’s Creek Billionaire Brothers series is a romantic comedy saga packed with the perfect mix of angst, tears, and laughs. If you like strong heroines and alpha males, steamy romances and witty love stories, this series is for you!

🎧Review🎧
Pierce is a successful lawyer whose sole focus has always been on career as the expectations placed on him and very high and failure is not an option. He learnt from a young age that love is a weapon that will only be used against you and he was determined to protect his heart. He hadn’t expected that rescuing a puppy would bring a woman into his life that would actually make him feel.

Leyla is a woman with a painful past who may dream of a happy ever after, but she isn’t sure it exists. She places all the love she has to share with the animals that she cares for until Pierce comes into her life. They fell in love with each other in spite of themselves, but lack of care and attention has caused the love between them to wither and the distance seems to be widening every day.

Their relationship had reached a breaking point when Pierce’s father passed away and family secrets were revealed. They now need to spend the next 18 months together as it affects so many more people than themselves, but will this be their second chance or are they just delaying the inevitable?

The feelings between Pierce and Leyla never diminished but the impact the past had on their actions was devastating for both of them. It is only with trust, understanding the willingness to open their hearts completely to each other that they can have the life they were destined to have. I enjoyed the narrators as they brought out all the angst and emotion of the characters and their situation.