Returning home stirs up all of the old memories and heartache Grace Holland would rather forget, but now that she’s back, she finally has a chance to put her demons to rest. Sparks fly when Aarron Beckett agrees to work on her granddad’s old plane. Fall for this hard-working hottie in Just For A Moment by Kate Carley, a Return to Hometown Romance, the next book in the Blue Collar Romance Series. 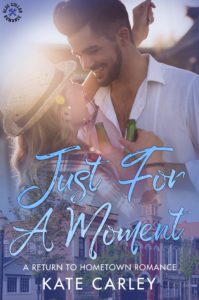 From author Kate Carley comes a blue collar, return to hometown romance with heat, heart and a happily ever after.

For Grace Holland, coming home to Oak Bend isn’t easy. The journey stirs up old memories, including the heartbreaking reason her family left town. But now that she’s inherited both her granddad’s old Victorian home and a World War II aircraft that he’d been working desperately to restore, Grace is ready to face down the demons of her past—if the people in Oak Bend will let her.

Aaron Beckett’s life is a balancing act. His aircraft mechanic business is booming and being a single parent of a young daughter keeps him on his toes. But when Gracie Jane Holland, granddaughter of his late friend, steps into his aircraft hangar, Aaron’s well-managed life soars out of control, and every free thought begins and ends with that beautiful blonde.

Even with plenty of excuses to avoid each other, sparks fly while they work together to restore an old fighter plane. And just for a moment, it feels as if they’ve found a deeper, more sustainable connection—until well-meaning half-truths threaten to tear them apart.

When her past and present collide, nothing can prepare Grace for the storm of hatred that pours down on her. Ruthless words leave her questioning whether staying in Oak Bend and putting her heart on the line is worth the pain. Can this small town ever be home again?

Escape to Oak Bend, where blue-collar hotties work hard and love even harder, especially when it comes to landing their happily ever after. 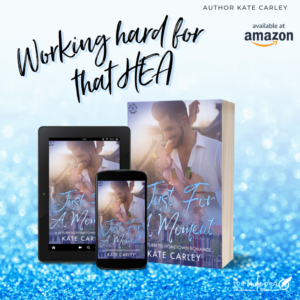 “Beck, I’ve heard so many great things about you. It’s nice to finally meet you.”

“People been talking?” Beck chuckled again, but he was studying her face, assessing her with those stunning eyes.

“My grandfather, Win Ross. I’m Grace Holland, and he left instructions that I should reach out to you. That you would have something for me.”

Beck tilted his head a bit to the left, a tender expression passing over his face. “Gracie Jane. I figured you’d be stopping by here at some point. I was sorry to hear about Win’s passing. Everyone in town loved him. And I felt blessed to call him my friend. God, I miss him every day.”

“Thanks for saying that, Beck. I miss him, too. And it’s just Grace now. I think my granddad was the only one still calling me Gracie Jane.”

“He did.” Beck nodded. “He talked about his granddaughter all the time. He was so proud of you and how you started that company of your own.”

As he spoke about her granddad, Beck’s eyes softened and his voice warmed. Talking about the most important man in her life with someone she’d just met felt bittersweet. But according to her granddad, Beck was one of his dearest friends.

“I remember how proud he was when I told him about my new business venture.”

“Right.” He bobbed his head. “Win said you had more work than you could do in a lifetime.”

“That sounds about right.”

“I’m sorry I didn’t make it to the memorial. I searched for information but never found anything.”

Grace bit her lower lip and then shook her head. The memorial had been a point of contention between her and her mother. “There wasn’t one.”

“Yeah, he always said he didn’t want anything like that, but I wondered if his family would have one anyway.”

“No. My mom and I…We just wanted to do exactly what he wanted.” Grace’s mother had an entirely different interpretation of what Edwin Ross had wanted. “And his wish was to not have people standing around, staring at him.”

Several unpleasant tasks still remained to be accomplished today, and they dampened the joy Grace generally experienced reminiscing about her granddad. “My granddad left something here for me. Do you have that?”

“Right.” Beck pointed toward the corner of the enormous hangar. “It’s in my office.”

With quickened steps, Grace kept pace beside Beck. “This place wasn’t here before. I mean, when I used to live here, there was the airstrip, but there weren’t many hangars. Maybe two or three.”

“It’s become a thing. Owning a plane. Faster than the ferry if you’re crossing Lake Michigan. Lots of people around the county can afford it. And none of the other towns in the area have an airstrip.”

Stopping at the door to his office, Grace watched while Aaron walked to his desk and lifted a heavy-looking silver paperweight shaped like an airplane. He plucked a key from underneath and went to a tall wooden cabinet in the corner. With a twist of his wrist, he unlocked the door. From her position outside his office, she could see the small black safe. He entered a code, and the door swung opened. Shifting the contents around, he produced a manilla envelope. Then, Beck reversed his steps until he was standing in front of her again, presenting her with the envelope.

The strained expression on his face was exactly how Grace’s heart felt in the moment. A deep ache—one of loneliness and sorrow—created by the loss of a precious soul. Slowly, she reached for the envelope.

“Thank you, Beck. Thank you for keeping my granddad’s wishes safe for him. For me.”

“Yeah, no problem.” Beck pinched his lips together and glanced around before meeting her eyes again. “So, are you ready for your tour?”

“Tour? Now? No.” Grace shook her head, fighting a choking feeling at the back of her throat. A tour—wasting time, wandering around—wasn’t part of her plans for today. Not even for a few minutes. “No. I don’t need a tour. But thanks for this.” She lifted the envelope to indicated she had all she needed at the moment.

Again, he tilted his head the slightest bit to the left and then gave a gruff grunt.

“Suit yourself,” he said. Like a switch had been flipped, his tone turned dark and sarcastic, and Grace had no idea why. “See ya around, Gracie Jane.”

After her grandfather passes away Grace decides to return to the hometown that holds so many devastating memories. She finds out that not only has she inherited his house but his planes as well which brings Beck and his daughter Piper into her life.
Beck is aircraft mechanic who has been assisting Grace’s grandfather with his planes and agrees to help her finish them. As they spend time together they develop feelings for each other but between the painful past and the secrets of the present they are in for a bumpy ride.
This is a touching story about healing from the past and the power of love as Grace and Beck have some turmoil to overcome which makes them and their love stronger.

Kate Carley broke onto the indie publishing scene in 2016 with her debut novel, Challenged, a 2017 RONE award winner. Since then, she has released ten additional titles that explore small town, family sagas in both the romantic suspense and contemporary romance genres.

Kate took a meandering path to get to the point of published author, including a short stint as a computer systems designer and an extraordinary journey as a home-schooling mom. After more than a dozen years of teaching her kids, Kate opened the front door, pointed the youngest in the direction of the local high school, and focused her attention on writing romance novels.

Now that her four children are off writing their own adventures, Kate is free to drift along in her fictional world, plotting the rise and fall of her characters. She has a passion for black coffee, dark chocolate, and red wine. Not necessarily in that order. Kate lives in the Midwest with her family.