Release Date: December 9
HE IS THIS STORIES LEAST LIKELY ROMEO.

Roman Whitaker is every girl’s best friend. An easy going nice guy, Rome is brilliant and funny. At the age of twenty-two, he’s moving out of his parents’ house for the first time and into off-campus housing with two complete strangers.

No more Mister “Playing it Safe.”
Rome may be wicked smart, but math and science will only get him so far, and they certainly won’t land him a first date with the girl of his dreams.
For that, he’ll get a little unwanted help from his friends—and meddling family members.
YOU NEVER FORGET A FRIENDLY FACE.
Lilly Howard is tired of being taken for granted. After breaking up with her philandering boyfriend, she’s giving up guys and learning to love herself again.
She’s sick of playing nice.
When she bumps into Rome, they become instant friends. When he asks her to be his fake girlfriend to keep his family off his back, she agrees—but only if he’ll return the favor…
Grab Your Copy Here:
Amazon US | Amazon CA | Amazon UK | Amazon AU
Free in KU 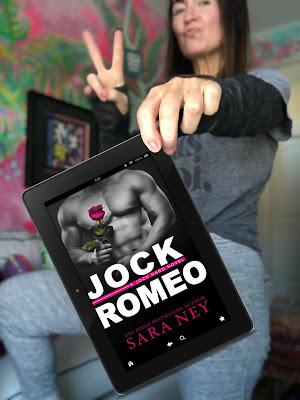 Lilly is a cheerleader for the college football team not because she wants to but because it is easier than fighting with her demanding mother. She is vivacious and has recently ended her relationship with her unfaithful boyfriend who happens to be a football player. When it comes to her best friend’s roommate Roman, she is drawn to him in a way she never expected as he sees her and not just her outward beauty.

Roman is sexy, shy and studious. He has recently moved out of his parent’s home and is loving with Lilly’s best friend and her boyfriend which has the four of them spending time together.

They had a casual encounter three years earlier at a party, but he doesn’t believe that someone like her would be interested in someone like him. They are opposites in so many ways but exactly what the other needs in their life. Roman’s family adds a new level of humor to the story and their romance is the perfect mix of sweet and sexy.

Sara Ney is the USA Today Bestselling Author of the How to Date a Douchebag series, and is best known for her sexy, laugh-out-loud New Adult romances.