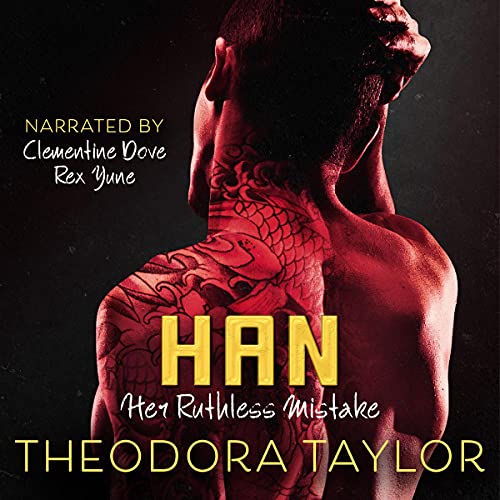 This ruthless crime lord’s kindness comes with a price. Possession. Complete and utter.

Jazz: I’m a determined dreamer – at least I used to be. I put all my dreams on hold and withdrew every penny from my savings account to pay the debt my ailing father owes to a local gang

Except, according to the gang’s slimy leader, even my life savings won’t be enough to pay the enormous debt my dad’s accrued. And his leering gaze lets me know exactly how he wants me to pay the balance.

A ruthless stranger offers to pay my remaining debt. He’s a tattooed crime lord, a cold, beautiful animal who regards me with dead eyes. The price for this kindness? Possession. The complete and utter kind.

You’re mine, he informs me when I ask him why he did it, leaving me to figure out….

Is he my unexpected savior or my ruthless mistake?

Han: I learned from a young age that women aren’t worth much. They don’t stay. They’re not loyal. They weaken you, then disappear at the first sign of trouble.

That’s why I don’t do relationships – especially with good girls who have no place in my criminal underworld.

I should stay away from her. Let her pay me back some other way.

But I can’t. She’s golden sunshine wrapped in a sexy little package, lighting up all the dark parts of my heart. And when she asks me why I did it, two words rise without thought or reason.

She thinks I’m the mistake, but it’s the other way around. I don’t do relationships. I don’t even let women spend the night. But this one…

She has me breaking all of my rules.

🎧Review🎧
Jazz has been saving everything she has earned so that she can buy a surfing school and her dream is almost within her reach when she needs to use that money to save her father. The only problem is that the man her father is in debt to is a dangerous man who is now demanding interest in a way she doesn’t want to pay. When Han purchases her and her debt she isn’t certain which fate was worse.
Han has been betrayed in the past and doesn’t trust many people especially women. He is drawn to Jazz’s sassy personality in a way he never expected, and she proves to be his equal in every way but will he be able to convince her that she can trust him with her heart and her life?
Although they may appear to be an unlikely match Jazz has a way of challenging him at every turn which is exactly what he needs in his life. Hot chemistry, suspense and surprises you don’t see coming. I thought that the narrators brought out both the protector in Han and the feisty personality of Jazz which had you invested in the characters and their story.