Release Date: June 14
“Somewhere in the world there is a defeat for everyone. Some are destroyed be defeat, and some made small and mean by victory. Greatness lives in one who triumphs equal over defeat and victory.” ~ John Steinbeck, ‘The Acts of King Arthur and his Noble Knights’.
When the secrets of Donovan’s past sins are revealed, his and Julia’s snow globe is threatened. With both personal and business endeavors at stake, he and Julia are forced to face the threats and dangers head on, recognizing that villains don’t always lurk in the shadows and allies come from the most unexpected of places.
Who will be left standing when the final curtain falls?
Will what started on a dark snowy night, survive the sun’s light?
Don’t miss a second of the much-anticipated conclusion to the Sin series.
From New York Times bestselling author Aleatha Romig comes a brand-new age-gap, family saga, chance meeting, contemporary romantic-suspense novel in the world of high finance, where success is sweet and revenge is sweeter.
Have you been Aleatha’d?
*BLACK KNIGHT, a full-length novel, is book four, the final novel in the Sin Series. Join the emotional ride along the white ribbon, begin with RED SIN, continue with GREEN ENVY and GOLD LUST, and find the dramatic conclusion in BLACK KNIGHT.
Grab Your Copy Here:
Amazon Universal | Apple | Nook | Kobo | Google Play | Amazon Paperback 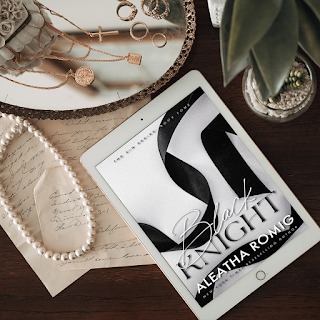 🖤Review🖤
Van and Julia have overcome so much to be together, but their fight is far from over. The surprises keep coming and the only thing that is certain is their love and trust in each other.
I really enjoyed the evolution of both these characters as the strength and resilience of Julie emerges while Van shows that Julia is his world and his loyalty and support for her was unwavering.
The chemistry between them burns hotter and the love between them stronger as they prove that as long as they are together they can overcome anything.
Binge the completed series Here!