The Wrong Bridesmaid by Lauren Landish

Buy links → Read it for #FREE with #KindleUnlimited! 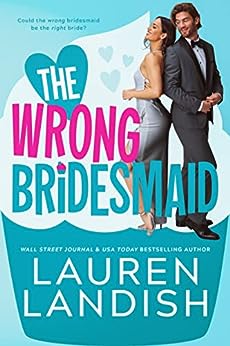 Wyatt Ford hightailed it out of Cold Springs to get away from his influential family and the unwanted privilege that came with it. Returning for his brother’s wedding dredges up every reason he left. One unexpected bright spot: a curvy knockout who slings burgers, hustles pool…and hates the last name Ford.

Hazel Sullivan is fiercely independent and happy to be maid of honor for her best friend’s wedding, but she isn’t looking for romance. Especially not with a man whose family is dividing her town into a battleground with their development plans. Fighting the family is easy. Fighting Wyatt? Not so much. Why does the enemy have to be so drop-dead gorgeous?

The sparks that fly between Hazel and Wyatt might start out as combat, but one kiss and it’s total surrender. How is a happy ever after even possible for two people with so little in common? Except, of course, for an overwhelming attraction and that growing temptation to say “I do” themselves.

When Wyatt found himself at odds with his ambitious and affluent family he couldn’t leave his home town fast enough however he couldn’t say no when his brother asked him to come for his wedding. His family’s plans for the town has inspired the wrath of the people who live there and he finds himself on the receiving end as well especially when it comes to Hazel.

Hazel is feisty, fiery and isn’t shy when it comes to letting Wyatt know her opinion of his family and what they are planning. She also happens to the be the best friend of the woman his brother is marrying so keeping her distance is more difficult than she imagined. As they spend time together the sparks fly and she begins to realize that there is much more to the man than she thought.

Humorous interactions, intriguing characters and a great cast of secondary characters will keep you entertained as you watch the romance between Wyatt and Hazel unfold.